Collingwood captain Scott Pendlebury believes his side is starting to “build the brand”, but has stressed the Magpies' recent rich vein of form will be for nothing if it doesn’t continue on Anzac Day against arch rivals Essendon.

But for a largely disappointing display in round one against Hawthorn, Nathan Buckley’s side has been impressive in 2018, with strong wins against Carlton and Adelaide following a heartbreaking loss to Greater Western Sydney. 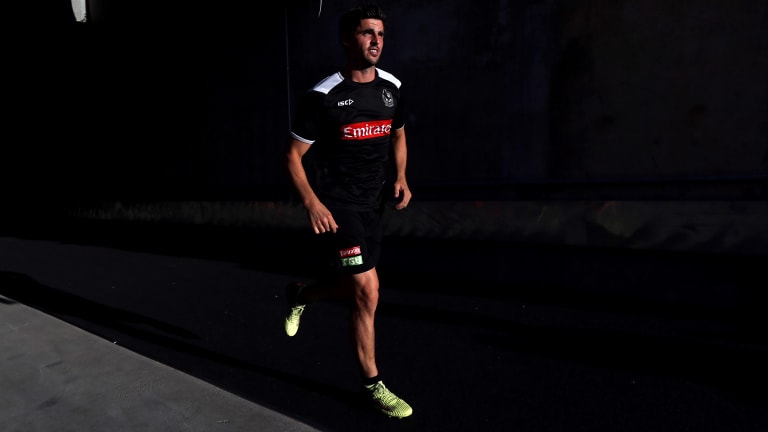 Scott Pendlebury is lining up for his dozenth Anzac Day match.

Pendlebury says the improvement needs to continue on one of the biggest stages of all.

“I think we’re starting to build the brand of footy we want to play,” he said.

“All the great sides; Hawthorn, Geelong, it’s all built on trust and being a cohesive unit and I think that’s what we’re aspiring to do.

“We played so well against Adelaide but it doesn’t count for much come tomorrow, so hopefully we can pick up from where we left off, but we know it’s going to be intense, it’s going to be hot at the start and we want to make sure we jump out of the gates ready to go.”

In his 13th year of football, Pendlebury will step onto the MCG for the 12th Anzac Day in his career.

And despite putting in an impressive performance back in 2007 (21 disposals and a goal), it’s not one he remembers fondly.

“The first one I just remember being so nervous,'' he said.

“I was out there with 100,000 people, I just couldn’t gather myself at all for that whole game.

“Each year you get a little bit more composed, but you still get butterflies in the stomach with the ceremony that happens before the game.

“We’ve got a few first-timers tomorrow who will experience that for the first time. 'Stevo' (Jaidyn Stephenson) is an 18-year-old kid about to play in front of a 100,000, he’s excited by it.”