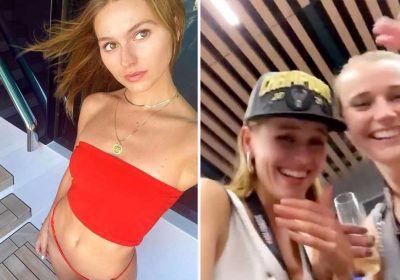 Mallory Edens, the daughter of Bucks co-owner and billionaire Wesley Edens, joined the team for its champagne-filled locker room party after winning the 2021 NBA Finals on Tuesday night — after Milwaukee beat the Suns 105-99 to close out the series in six games.

Edens documented the post-Finals party and took her 200k-plus followers along for the celebratory ride.

The model filmed Milwaukee’s franchise face Giannis Antetokounmpo holding his Finals MVP trophy in the air while smoking a cigar. He sported Nike ski goggles covered in champagne as he made his way through the Bucks’ locker room.

Eden then snapped a photo of Bucks center Brook Lopez smoking a cigar, given to him by Antetokounmpo. He to sported ski goggles and held a bottle of bubbly.

Another clip shared to Eden’s Instagram story showed her getting sprayed with champagne amid the celebration. She donned an NBA Finals championship hat, gifted to the Bucks after Game 6.

A final slide showed custom Cincoro Tequila bottles engraved with the message, “HISTORY MADE NBA Champions 2021.” Eden’s father is co-founder of the beverage brand, which aired a primetime commercial during Game 6 of the finals.

Edens first garnered social media attention from Bucks fans when she appeared on stage at the 2014 NBA draft lottery in New York City. At the time, Milwaukee was at a league-worst 15-67, and lost the No. 1 lottery pick to the Cavaliers. The Bucks landed the No. 2 pick that year.