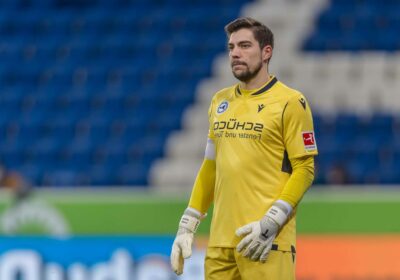 MANCHESTER CITY have completed the signing of German goalkeeper Stefan Ortega on a three-year contract.

The 29-year-old arrives at the Etihad as a free agent after his contract with Arminia Bielefeld expired earlier this week.

And he will provide experienced back-up for first choice Ederson – meaning current understudy Zack Steffen can join Middlesbrough on a season-long loan.

He said:  “This is a fantastic move for me. Manchester City are an amazing team – a squad with world-class quality in every area.

“To be given the chance to join this group of players and help continue the club’s success is a dream for me.

“This new challenge of coming to City and playing in the Premier League is too good for me to ignore and I can’t wait to get started.”

Director of football Txiki Begiristain is pleased to have secured a deal for an experienced keeper who was on stand-by for the Germany squad at last summer’s Euros.

While his club were relegated last season, he was certainly kept busy – making more saves than any other goalkeeper in the German top flight.

Begiristain said:  “This is a very good deal for City. Stefan has excellent pedigree – his career speaks for itself.

“We are signing a goalkeeper who has vast experience, and he will help us in our quest for more trophies.”

Ortega is expected to be quickly followed to the Etihad by another new face with Kalvin Phillips due to have a medical at the CFA today.

City agreed a £45million deal with Leeds for Phillips last Friday but have had to wait for him to return from holiday to complete the formalities.