It was deep in the bowels of McDonald Jones Stadium late on Friday night, long after teen sensation Riley McGree had finished doing television interviews about his stunning strike, long after Newcastle Jets coach Ernie Merrick had finished hailing his team, long after players had dribbled through the mixed zone, alternatively dizzy with delight or despondent with disappointment after the Jets had come from behind for a 2-1 win over Melbourne City in the A-League semi-final.

Socceroo legend John Kosmina – a top-quality striker in his day and a man who knows more about scoring goals than most – was chatting with reporters and those left scurrying around, filing, writing or packing up television apparatus after an outside broadcast. 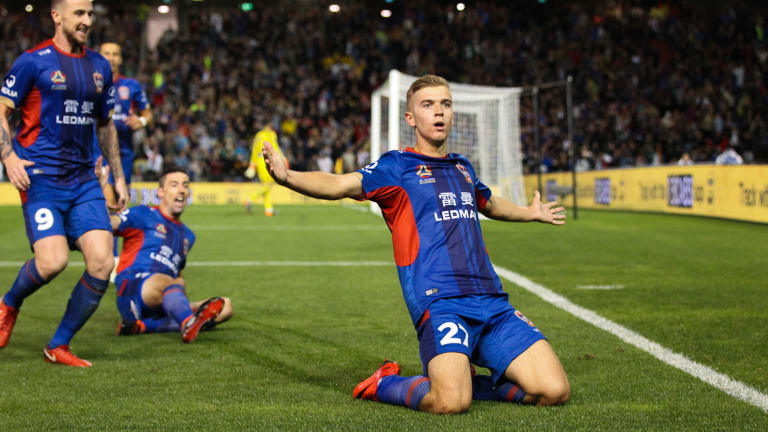 Was it a fluke, Kosmina, now coaching in Brisbane and working as a Fox Sports pundit, was asked.

''Who cares," he shot back instantly.

''Did he mean it? It doesn't matter,'' he said of McGree's outrageous scorpion kick which drew the Jets level shortly after the second half began.

''The main thing is that he did it. Will he ever do it again? Probably not. But did Olivier Giroud mean it when he did it for Arsenal? Did Henrikh Mkhitaryan mean when he scored a similar one? It doesn't matter. He did it and his team won and it will always be remembered.''

City boss Warren Joyce described the goal as ''fortunate'', suggesting McGree would be unlikely to achieve something like that in the future. Few would argue with him there, and Joyce would have felt in his bones when that kind of outlandish leveller went in that perhaps the fates had simply decreed that this wasn't going to be City's night.

''He’ll never score a goal like that ever again in his life. It’s behind him isn’t it. He just sticks a leg out and it goes in the back of the net. That’s football," Joyce said.

Dario Vidosic, the City midfielder, said the goal was ''freakish'' but no one in the stadium, or those millions around the world who have now seen it replayed countless times on social media, will care.

It was fantastic, it was fanciful, it was fabulous – indeed, it will become the stuff of legend in McGree's life from here-on in, even if the youngster himself admitted that it was a trifle lucky.

''I did get a bit lucky, but I had the momentum going forward, I just happened to swing my leg at it and it went in. Definitely a bit of fluke I think, but you’ve gotta try it to get it.”

Social media went into meltdown, as might be expected, while many highly credentialed former players and pundits have labelled it the best goal ever seen in the A-League.

Still more are claiming it should get the Puskas Award for best goal of the season scored anywhere in the world by a male or female.

It will be of scant consolation to a disappointed City that it took a freakish strike and a defensive error for the Jets to get the two goals that won the game, but on the balance of the 90 minutes the hosts deserved their grand final spot.