As he awaited surgery on his finger, busted Penrith prop Trent Merrin revealed his dream of playing Origin with good mate Reagan Campbell-Gillard this year was far from over.

Merrin will go under the knife early on Sunday to repair the right index finger he damaged during the warm-up before the North Queensland clash in Bathurst on Friday. 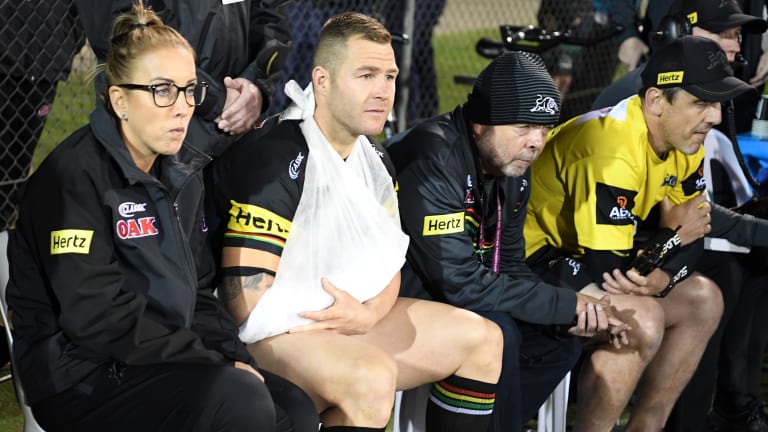 Painful viewing: Trent Merrin watches from the sidelines at Bathurst on Friday night.

The Penrith forward made a tackle on teammate Sione Katoa and looked down to discover part of the bone in his finger ''popping out'' of his skin.

Merrin was going to head to Orange Hospital, but at half-time hopped in a car with a Panthers trainer and raced back over the Blue Mountains to Nepean Hospital. He was back in hospital on Saturday.

Merrin initially told Fairfax Media that there was a faint hope he could miraculously return against Newcastle next Friday, but he later confirmed he could be out for between one and six weeks, depending on what the surgery uncovered.

It is a further blow for the Panthers, who have already have a host of topliners in the casualty ward, including Nathan Cleary, Dylan Edwards, Josh Mansour and Waqa Blake.

Merrin's personal goal this season was to return to the representative arena for the first time since 2015 and play along side neighbour and front-row partner Campbell-Gillard.

"I'll be pushing to get back as soon as possible,'' Merrin said on Saturday afternoon.

"They'll operate in the morning and get a better idea of what damage there is. They have to clean it out, and the bone was exposed.

"'Reg' keeps me motivated. He's young and has it all ahead of him. I'd love to play with him in that sky-blue jersey, and for me it's also a personal goal to get back in that arena.

"I really wanted to test myself out this year. The last few years I haven't been in the right frame of mind to put myself in that position [for an Origin recall], but I had a good look at myself and worked hard.

"Reg has been excellent. He's leading us forward, he's maturing and definitely passionate about the club and players he plays with.''

Merrin and Campbell-Gillard have combined brilliantly up front for the Panthers in the opening two months of the season.

The Panthers have done a remarkable job to be so far up the ladder given the injuries. North Queensland only just clung on for a 26-20 victory on Friday.

Campbell-Gillard was naturally disappointed for Merrin, and told Fairfax Media as he signed autographs behind the main grandstand at Carrington Park: "It's every week. It sucks. We're getting injuries left right and centre, and now I've lost my front-row partner in the warm-up.

"We just have to deal with it. Myself, him and 'Fish' [James Fisher-Harris] had a good combination going. It's rugby league, it's a cruel bloody sport, and just when you think you've got some momentum going, you're forced back to the drawing board.''