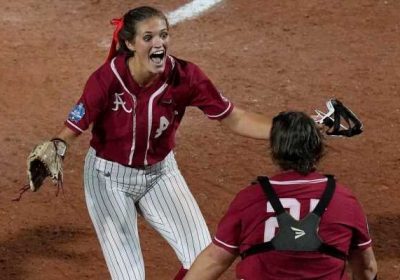 Fouts struck out 14 batters on her 21st birthday. Kaylee Tow added a three-run home run in the sixth inning.

The win gives the Crimson Tide its first win over UCLA in school history. Alabama is one win away from a berth in the national championship series and will play Sunday against an opponent to be determined.

Here are three things we learned as the Crimson Tide advanced further into the WCWS:

Fouts continued her domination in Oklahoma City with a complete game, raising her season strikeout total to 344. She’s had 22 starts with 10-plus strikeouts and nine in a row.

She has struck out the side in five innings of 13 innings pitched the WCWS and punched out 30 of 41 batters faced via strikeout.

Fouts shut down a Bruins lineup that ranks in the top 20 nationally in slugging percentage (.561), on-base percentage (.409), home runs (74) and batting average (.320) and averages more than six runs per game.

Alexis Mack reached on a leadoff infield single and came around to score on Bailey Hemphil's eighth double of the year. Jenna Johnson singled for her second hit of the WCWS, scoring Hemphill. All three hits in the inning came with two strikes.

Kaylee Tow hit a three-run home run in the fifth inning, scoring Mack and Hemphill. Back-to-back sacrifice bunts and an error allowed Elissa Brown to put the ball in play and score Woodard for the sixth run in the sixth inning.

The Crimson Tide added three stolen bases in the game and reached base as the leadoff in three innings.

The victory gives the Crimson Tide is the first- against UCLA in 11 meetings.

Alabama earned its 20th win in a row, 18th against a ranked opponent. The Tide have outscored opponents 122-35 during the streak.

Alabama plays at 2:30 p.m Sunday (ESPN) in the semifinal round. The opponent is yet to be determined.

With a win, the Crimson Tide can advance to the championship series, which is a best-of-three format beginning at 6:30 p.m. CT on Monday (ESPN).

With a loss, Alabama will face the same team again at 8:30 p.m. Sunday (ESPN2). The winner of that game would advance to the championship series.