Home » Sport » Navy football coach fired for COVID-19 vaccine refusal: 'I continue to stand firm in my conviction of faith'

Navy football coach fired for COVID-19 vaccine refusal: 'I continue to stand firm in my conviction of faith' 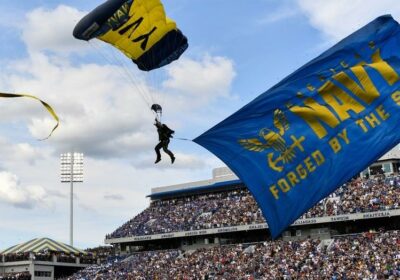 Navy football coach Bill Ray Stutzmann was fired this week after refusing to get the COVID-19 vaccine and then having his request for religious exemption denied, he said Monday.

Stutzmann, who served as the offensive assistant coach, confirmed in a lengthy post on social media that he would be leaving the Midshipmen after three seasons after failing to comply with the program’s vaccine protocols.

“The Naval Academy Athletic Association policy regarding COVID-19 requires all coaches and staff to be vaccinated against this virus. Based on my religious convictions, and after much thought and prayer, I am unable to follow the requirements of the Naval Academy’s COVID-19 policy, as it had changed these last few months,” his statement read.

“After applying for a religious exemption and attempting to further negotiate alternative working arrangements, I was ultimately relieved of my duties here at Navy. I continue to stand firm in my conviction of faith, but I understand and respect that each individual and institution has a choice on how they wish to manage these issues.”

Head coach Ken Niumatalolo said shortly after that Stutzmann’s departure was a big loss for the team but he did not comment on his refusal to get vaccinated.

“He’s added a lot to our program,” he said. “Wish him the best of luck, he and his wife Shanelle. Wonderful young man. Got a bright, bright future in this profession.”

After a big loss against Air Force over the weekend, longtime offensive coordinator Ivin Jasper was let go but on Monday – following news of Stutzmann’s firing – Niumatalolo announced that Jasper will stay on as the quarterbacks coach.

“It was an unfortunate situation. There’s some emotion involved, obviously, but we just lost a big game,” he said. “I think cooler heads have prevailed.”

For now, Niumatalolo will call the plays.