Netball: The controversy looming over Anna Harrison’s potential return to the Silver Ferns 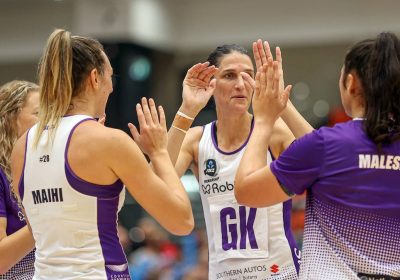 Silver Ferns head coach Dame Noeline Taurua is on a quest to lure former defender Anna Harrison back into the national side, but media silence and controversial previous comments have left doubt over the 38-year-old’s eagerness.

After retiring from netball in 2018, Harrison made a shock comeback with the Northern Stars this ANZ Premiership season under coach Kiri Wills.

Her impact was immediate and the Stars have so far won five from six games to sit at the top of the ladder.

It caught the eye of Taurua, who has made public her interests around Harrison’s international availability.

Harrison has remained unavailable to media but has formerly stated her concern with older players stepping back into the fold.

In 2018, Harrison was outspoken about old teammate Casey Kopua’s return to the side, telling Radio Sport at the time it didn’t “sit well” with her.

“From a New Zealand netball point of view it’s a little bit bad … you need to build players that are coming through. To bring back players, as good as Casey is, I don’t know if that is the right move,” she said.

“You need to work with what you’ve got, can’t keep going back and asking people. Casey and I are older … from a growth point of view and trying to move forward, going backward isn’t the right way.”

When asked about the comments, Wills said she believed it would certainly be something in the back of Harrison’s mind.

“She’s aware that she made those comments,” Wills told the Herald. “But as I said to her last year, there’s some young defenders that do need some seniority around them to flourish and I think the proof is in the pudding with her input into Elle Temu and how well Elle is playing … There’s a place for everybody, we’ve just got to get the balance right.

“The reality is there’s a time and a place for everything and I think that if you look at the number of Ferns, Casey herself has retired, you’ve had Katrina Grant, Phoenix Karaka all on maternity leave. The defensive stock at the moment is really low so there is a time and a place and people make decisions that are best for them and I think we’ve got to trust Noeline to make the decision that’s best for the national team.

“Casey came back for the national side and the result was we won a World Cup.”

Wills explained that Taurua and the selection panel would soon visit the club where she would need to communicate where individuals were at and who would be made available for selection at the conclusion of the domestic season.

She said although nothing had yet been decided, she was in full support of her star defender.

“For these legends of the game to come back after retirement, they’ve got a lot to lose so for me, it’s a positive affirmation for [Anna] that she’s playing really well that she’s as good as she has been and for her, that I think was going to be the biggest challenge for her this year.

“You can’t argue with Anna and Elle Temu’s stats, they’re leading in a lot of the numbers in the game, they’re getting a lot of ball, we were a team last year that could only get three to four turnovers in a quarter, now we’re up to eight or nine and those are really good numbers.