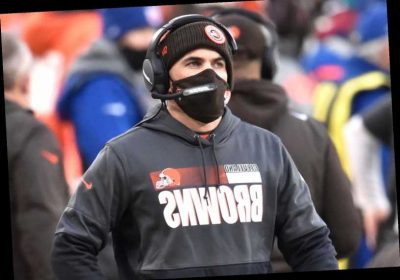 Giants vs. Cowboys line, analysis and predictions for all Week 17 NFL games

Giants vs. Ravens line, analysis and predictions for all Week 16 NFL games

Saints vs. Vikings line, prediction: It's all set up for New Orleans

The Browns did have some luck on the first-play touchdown vs. the Steelers, but that was not the only reason they jumped out to a 28-0 lead. And that was without coach Kevin Stefanski, who returns for this one. This is a team that can put up a lot of points, but also one that seems to have a street-fighter mentality.

They’re not the Chiefs by a long shot, but Kansas City does enter with an ATS record of 1-6-1 in its past eight games.

In addition, the ref is Clay Martin, and road teams have covered in 70 percent of his career games (thanks to VSiN’s Josh Appelbaum for the referee trends).

The total on this game has skyrocketed three points since it was posted. Though we’re not getting the best number, the Over is still the side with the sharper players.

It figured we’d get Tom Brady vs. Drew Brees in the playoffs, and here it is. The teams already have met twice this year, with the Saints winning the opener, 34-23, at home, then destroying the Bucs 38-3 in Tampa on Nov. 8. But if it were that easy to predict a third straight New Orleans breeze, the line would not have opened at a modest 3.5 then quickly bet down to 3 by sharps who grabbed “the hook.”

Tampa Bay allowed a backdoor cover to Washington’s Taylor Heinicke, but you can’t lose sight of the fact the Buccaneers scored 31 points and rushed for 146 yards against a very tough defense. Brady has plenty of firepower to counter the Saints attack — with Mike Evans, Chris Godwin, Rob Gronkowski and Cameron Brate in the passing game and Leonard Fournette (and possibly Ronald Jones II) on the ground.

Last week I mentioned that dome playoff games have gone over the total around 65 percent of the time the past decade, per VSiN. That didn’t help when the Bears showed up on Sunday with an amped defense and clueless offense and the game stayed way under. But this matchup figures to be go-go-go with both teams 10-7 to the Over this season.