Home » Sport » NFL WEEK 8: Our official predictions for who wins this weekend 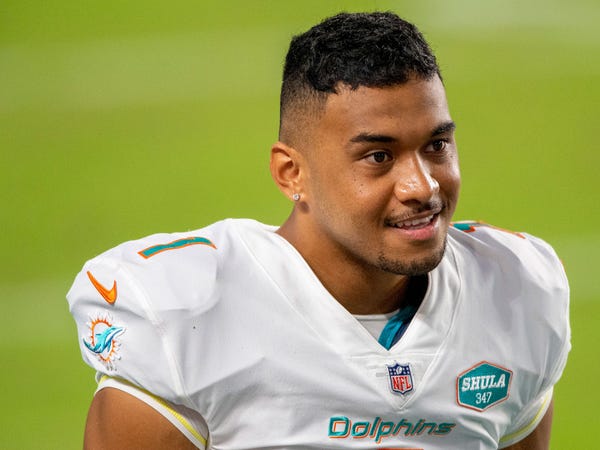 Through seven weeks of NFL football, the season has been as difficult as any to bet on.

Schedules and rosters change at a moment's notice due to COVID-19. Sometimes a team's practice schedule is completely upended, but then by the time Sunday comes around, they'll be ready to beat the breaks off of their opponents, practice be damned.

So far this season, our picks have gone a middling 47-50-4 against the spread — far from a disaster, but you don't bet on football to break even.

Please take a look below at our best bets against the spread for Week 8 of the NFL season (* indicates home team).

The Panthers handled the Falcons without too much trouble in their first meeting this year, jumping out to a 20-7 lead before halftime and not looking back. But Atlanta was without star wide receiver Julio Jones in that contest, and it feels like he's set for a big game in primetime.

The Lions have won two straight games coming into this weekend's game against the Colts. If you had offered me a bet at the start of the year that the Lions would not win three straight games at any point during the 2020 NFL season, I would have taken it in a heartbeat.

The Packers scored 43 points on the Vikings back in Week 1, with wide receiver Davante Adams going off for 14 receptions, 156 yards, and two touchdowns. I hope you aren't playing against him in fantasy this weekend.

This could be a trap spot for the Titans, coming off of a frustrating loss to the Steelers that easily could have been theirs. But they should have enough to take care of the Bengals even if they aren't at 100%. Cincinnati doesn't really have a way of stopping Derrick Henry.

It's always risky to back Baker Mayfield to have two good games in a row, but it felt like in the second half last weekend, he really might have found his stride for the season. This one could turn into a shootout, so it might be more fun to bet the over.

Through seven weeks of the NFL season, we bet against the Jets every week until they covered the spread. Last week, they finally brought the experiment to an end, losing 18-10 as 10-point underdogs to the Bills, meaning we went 6-1 against the spread simply by betting on the team playing against the Jets for the first half of the season. Not bad!

Unfortunately, this week we have to take the Jets in the ugliest game of the week. I would likely advise against putting actual money on this game; how dumb would it feel to lose money because you bet on the Jets against the Chiefs? That said, this is too many points to give to an NFL team. 20-point blowouts aren't that common in the NFL, even if they do happen more when the best team in the league is playing the worst team in the league.

I believe in Tua Tagovailoa. I'm not betting against him in his first NFL game.

The Steelers are the only undefeated team left in the NFL but are still underdogs by more than a field goal against the Ravens. This game should be close, but it feels like we're getting an extra point or two on this side of the bet, so we'll play the value and hope for the best.

After starting the season 5-1, it feels like the Bears are getting ready to crash back down to Earth. Last week's loss to the Rams was a start, but after this week and then a game against the Titans after that, the Bears could be 5-4 before long.

Eventually, Seattle has to win a game comfortably, right? It can't be chaos every time they take the field.

The Broncos lost control of things against the Chiefs last weekend, but they aren't as bad as that 43-16 loss seemed to show.

After Andy Dalton went down with an injury last weekend, the Dallas Cowboys will turn to rookie quarterback Ben DiNucci to start this Sunday. DiNucci was a seventh-round draft pick this year out of James Madison University and completed two of his three passes after entering last week's game in relief. I wish him the best of luck.

The Giants have been bad all season but have tended to play games relatively close. They feel due for a blowout, and given that the team's offensive line is currently dealing with a positive COVID case, it feels like this week, the blowout might finally be coming.