Nothing makes sense about this first-place Mets team: Sherman 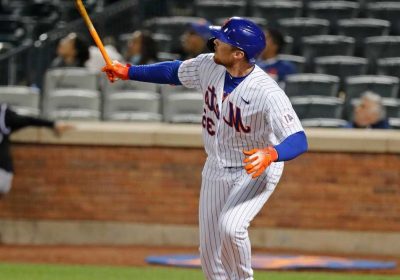 MLB must put a stop to cheating substance epidemic: Sherman

I can tell you the spin rate on Jacob deGrom’s first fastball on Saturday. It was 2,563 revolutions per minute. I can tell you none of the six hardest-hit balls in Sunday’s Mets victory over the Padres went for extra bases and three were outs. Heck, I can tell you what Michael Conforto is hitting with a runner on first and no outs — it is .000. He is hitless in 12 at-bats.

So much is quantified and catalogued now that I can pretty much tell you anything within the game. But even with all that is available at my fingertips and with more than 35 years experience covering this sport, I really cannot explain why the Mets are in first place.

Well, some of it is explicable. The top three starters have been brilliant, with deGrom the ace of the sport. The defense has been so much better than in recent years. The division, quite frankly, stinks.

But with winning teams there is something else, a mojo that is hard to define. It shows up in timeliness of performance or a breakout no one saw coming. The Yankees have mastered this – at least for the regular season – most of the past 25-plus years. So when Brandon Drury, for example, broke down early in 2018, Miguel Andujar stepped up to nearly win the AL Rookie of the Year and help the Yanks to 100 victories. And when Andujar broke down early in 2019, Gio Urshela emerged as a two-way force on a division winner.

For the Mets now it is kind of Drury. He is not much of a defender at third and arguably no better than the team’s fourth option when fully healthy. But Sunday, at the pivotal moment – bases loaded, one out – he went all Brooks Robinson to start an athletic, fantastic double play to bail out Marcus Stroman and allow the Mets to complete an uplifting series split against the Padres.

In this way, 2021 New York baseball has been like one of the body switch movies. One executive once told me so much of a season can come down to sequencing – walk, walk, homer is three runs while homer, walk, walk might just be one. Watching the Yankees this year is seeing no one step up that can minimize runs, in particular. Just the timing of a double play can be devastating – and nearly everyone of the Yankees’ major league-leading 58 have felt as such.

The Mets have spent so much of recent history living under a dark cloud. In the last two years, talent wise, they probably should have won the NL East. Instead, they persistently underperformed the talent; did what was ever necessary not to fully capitalize, for example, on deGrom’s genius, Pete Alonso’s brilliant rookie year in 2019 and Dom Smith’s 2020 revelation.

In 2020, for example, they had the impossible math equation of being first in the majors in average, second in on-base percentage and fourth in slugging, yet 13th in runs. This year they have an injury-depleted offense that is averaging even fewer runs per game than the Yankees. They are averaging the third fewest in the game, yet doing enough to win.

Neither Jose Peraza nor Kevin Pillar has satisfying stats. Nevertheless, they are both loaded with big, necessary moments. Jonathan Villar has been an invaluable extra regular. Billy McKinney has done more for the Mets in 10 games than he did in two years in the Yankee organization. While James McCann struggled, Tomas Nido rose to have an impact. When Seth Lugo was out, Miguel Castro was a stellar set-up man. Who saw Sean Reid-Foley’s or Tommy Hunter’s impact?

Steve Cohen tweeted on Sunday: “You got to love this team. They continue to find a way to get it done.”

And maybe it is as simple as new ownership. Perhaps the absence of the Wilpons alone has enabled the Mets to escape the inferiority complex and negative energy that so suffocated an organization. Rebirth through fumigation.

Now, deep breath, due to so many postponements, the Mets have an overstuffed schedule ahead. Their two wins in San Diego matched their number against above .500 teams (they had entered 2-10). Their record is barely better than the Yankees’ with all the hurrahs in Queens and curses in The Bronx.

But more than any team in the NL East, they have a way to get much better simply by getting healthy. They have Cohen’s wallet if they choose to wield it before the trade deadline. And for the first time in a while they have some unquantifiable something about them.

Is the magic actually back?