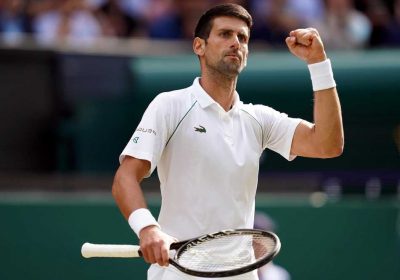 Novak Djokovic storms into Wimbledon final with chance at history

Djokovic now has swept the first three majors of 2021 and will enter Flushing Meadows with a chance to win the first men’s “Grand Slam” since Rod Laver in 1969.

If he can conquer Flushing Meadows, Djokovic, already regarded as the sports’ best defender with spectacular court coverage, would be all alone with 21 majors. He would smash any notion he isn’t the best ever, even if the Serbian is not as exquisite or beloved by the masses as Federer and Nadal.

Case in point: The Wimbledon crowd increasingly chanted “Ma-tt-eo” as the match raged on, pulling for the 6-5, rifle-serving righthander who had never made a Slam-event Final.

With the All-England club chants reaching a crescendo midway through the third set as Djokovic fell behind love-40 on his serve, the Serbian waved on the noise and then rallied for five straight points to hold.

“The Grand Slam” is compiling all four major titles in the calendar year. Federer nor Nadal never marched into the Open with three majors already in the bag as Djokovic will do. In fact, no men’s player had copped all three entering the Open since Laver’s accomplishment.

The Open will begin Aug. 30 with the men’s final on Sept. 12 before a full-capacity crowd. During last year’s pandemic Open, Djokovic got disqualified in the fourth round for accidently hitting a linesperson with the ball.

Last fall, Nadal routed Djokovic to tie Federer at 20 majors during the repositioned French Open. Djokovic responded in 2021 by winning the Australian Open, French and Wimbledon.

Berrettini’s last chance was foiled midway through the fourth set when it looked like the 25-year-old Italian would break Djokovic’s serve. Trailing 15-30, Djokovic chased down an impossible drop shot and flung it in for a winner. Djokovic pointed his index finger to the crowd, which serenaded him for his brilliance.

On the match’s first point, Djokovic double-faulted and did so twice in that first game but still pulled it out. Djokovic took a 5-2 lead, held a set point but the big Italian raced back to force a tiebreaker.

The Italian’s left thigh was wrapped from a previous fall in the semifinals but Berrettini, a 2019 Open semifinalist, moved a lot better, gained a 3-0 lead and held on for a 6-4 tiebreak win, closing it out with an ace.

Djokovic recovered to gun to a 4-0 lead in the second set. Even then, Berrettini fought back to nearly get it back on serve but Djokovic prevailed to knot the match at 1. Djokovic notched an early break in the third set and hung on.