The Canberra Raiders have slammed the NRL's decision to come over the top and effectively ban fullback Jack Wighton for the rest of the season.

Wighton will miss 10 games, which means he'll only play again if the Raiders make the finals, and he was fined $30,000.

He has five days to respond to the punishment for his involvement in a late-night Civic brawl in February, but it's unlikely they will appeal the decision. 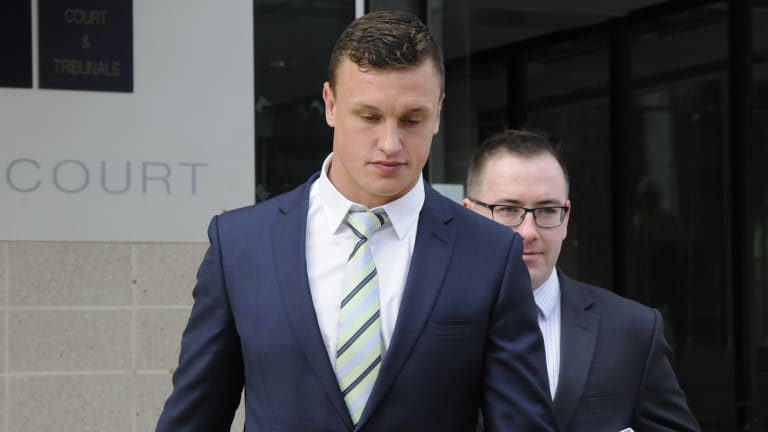 Raiders chairman Allan Hawke said the penalty was excessive and set an "extraordinary precedent" after they wanted him to only miss six games.

He said the Raiders backed their proposed punishment and questioned why the club was asked to come up with a sanction if the NRL was simply going to ignore it.

Hawke said it was time for the NRL and their integrity unit to take full ownership of imposing future sanctions.

The Raiders board were left disappointed and gutted by the decision, with the NRL effectively saying the club wasn't tough enough on off-field indiscretions.

They feel they have a proven track record when it comes to handing out sanctions to their players.

In the last 10 years they've sacked Todd Carney, Josh Dugan and Blake Ferguson for off-field incidents, only for them to then star for other teams.

"After reviewing all of the facts surrounding this incident we firmly stand by our decision and the punishment handed down by the club," Hawke said in a statement.

"We're disappointed to learn the NRL does not agree with this punishment and feel they have to come over the top and add a further four weeks and a monetary fine to the penalty.

"This penalty is excessive, as Jack still has to face further penalties imposed by the ACT Magistrate and Galambany courts.

"We are perplexed as to why the NRL felt the need to impose further punishment before this process was concluded and it sets an extraordinary precedent to the way matters are handled by clubs in the future.

"In light of this, it appears clubs don't really have a role in imposing penalties on their own employees, so perhaps it's time for the NRL and its integrity unit to decide these matters, so that there will be a consistent approach for future offences.

"We will continue to support Jack in his rehabilitation."

Wighton pled guilty to five counts of assault and one count of public urination, but won't face sentencing until November 14.

The Raiders are trying to suppress the CCTV footage and pictures of his victims' injuries, with that to be decided by the magistrates court in October.

Canberra came up with the sanction last Friday and the fact the NRL hadn't responded immediately had Raiders insiders concerned the governing body was going to impose a heavier punishment.

"It's very rare for the NRL to come in with a penalty above that which is agreed with the club. Normally we come to an agreement with the club and allow the club to announce that penalty," an NRL spokesman said on Friday.

"It's a serious offence and we just didn't think the six weeks was adequate."

Raiders captain Jarrod Croker said the turmoil wasn't affecting the players as they prepare for their must-win clash against the North Queensland Cowboys at Canberra Stadium on Saturday night.

They need to win seven or eight of their remaining eight games to have a chance to make the top eight.

Wighton has missed the last two games and the NRL's ban means he only becomes available if they play finals.

Raiders young gun Nick Cotric will fill in for Wighton at fullback against the Cowboys.

"It's not affecting us … we can't do anything about it. We've got to worry about training and preparing well and playing a good game [Saturday] night, hopefully get the win," Croker said on Friday.