Home » Sport » NRL: Raiders thump Titans but yet to fully click into gear

NRL: Raiders thump Titans but yet to fully click into gear The scary thing is, the Green Machine still hasn't fully kicked into gear.

Their attack exploded into life and their defence continued to be solid, but there were still a few errors in the Canberra Raiders' 32-18 victory over the Gold Coast Titans at Canberra Stadium on Saturday.

It's kept them in touch with top eight after their fourth win in five games. 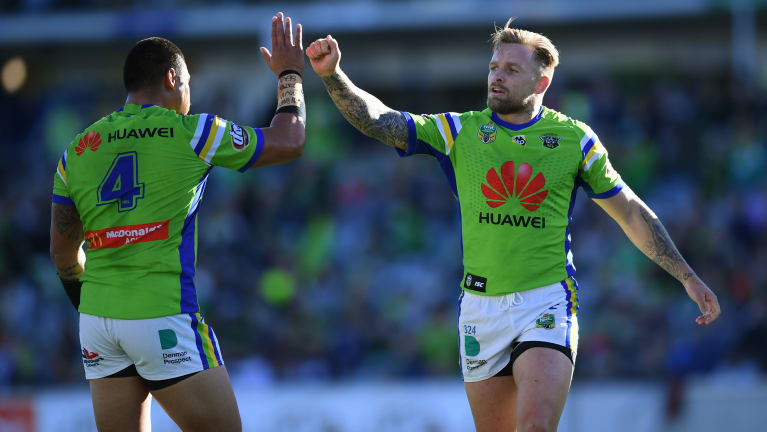 But the Raiders will anxiously wait to see if anything comes of Joe Tapine's hit on Titans captain Ryan James, with the second rower put on report in the second half.

The Titans probably should've known it was going to be a long afternoon after halfback Ash Taylor's kick at the end of the first set of the game went out on the full.

They finished the game with one fit player on the bench after they lost Jai Arrow (back), Jarrod Wallace (virus) and Keegan Hipgrave (concussion).

From Taylor's mistake, the Raiders strolled down the field and Sia Soliola walked over the line untouched from two metres out when Joey Leilua's dummy run completely bamboozled the Titans' defence.

Blake Austin took advantage of back-to-back penalties when he put Tapine straight through a hole for the second and then Gold Coast fullback Michael Gordon lost an Aidan Sezer kick in the sun and it bounced into Jarrod Croker's arms for the third.

It was round one all over again – a fast Raiders start, just this time without the same Titans fightback.

The Raiders took a 20-0 lead into the sheds at half-time with the home team's fourth try coming from a sweep left that was finished off expertly by potential NSW Blues bolter Nick Cotric.

It could've been more though as a few errors crept into the Green Machine's game and the Titans were also fortunate not to lose Konrad Hurrell for a professional foul for a bump on Croker.

Croker was chasing a Sezer grubber kick when Hurrell bumped him, but the Gold Coast centre disguised it well enough to not only avoid the sin bin but a penalty as well.

That was when the Titans lost lock Arrow to a back injury after he was on the wrong end of a Junior Paulo hit-up and he asked to be taken to hospital after he struggled to breathe.

The visitors had already lost Wallace to a virus.

Rapana could've put Austin away after a break down the right wing, but opted to kick ahead for the five-eighth and the opportunity was lost.

It was one of the few mistakes the Raiders right winger made as he combined his damaging running game with the tireless work he's known for out of his own half.

For the second week in a row Rapana ran for more than 200 metres.

Thanks to a sloppy Raiders start, the Titans gave the home fans a bit of a scare at the start of the second half.

Two Taylor kicks provided tries to James and then Kevin Proctor to have thoughts flicking back two months ago when the Gold Coast fought back for a last-gasp win.

But normal transmission resumed after Hurrell passed into touch to swing the momentum back to the home team.

Shannon Boyd's Raiders future might be in doubt, with links to a big Titans offer, but there was no doubting his try as he barged over from close range.

Then Rapana did a Rapana – almost nonchalantly diving into the corner for a spectacular finish to end the contest.

Titans forward Max King scored a consolation try, his first in the NRL.

The Raiders now host the Cronulla Sharks next Sunday, while the Titans face the Melbourne Storm at Suncorp Stadium on Saturday.