Kalyn Ponga was just one month away from being lost to rugby league and scooped up by the AFL on a four-year deal with the Brisbane Lions.

The fast emerging Knights superstar will try to steer his team to their third straight win when they host South Sydney at a packed McDonald Jones Stadium on Friday night. 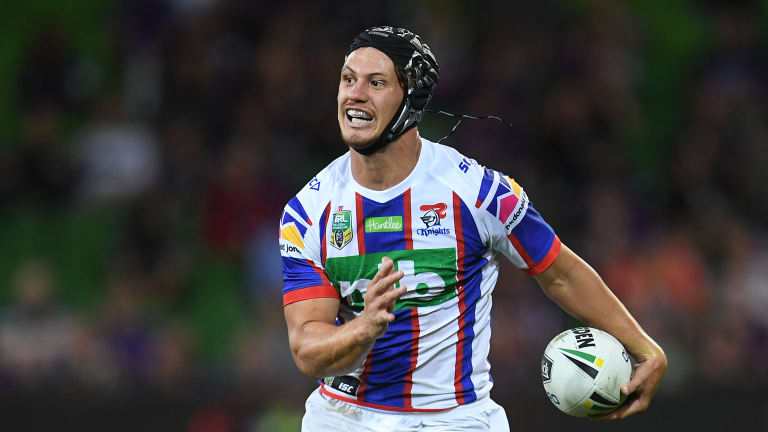 On the rise: Kayln Ponga is living up to his hype at the Knights.

But Fairfax Media can now reveal just how frighteningly close the game's future pin-up came to quitting rugby league – and for the AFL, not rugby union.

While there were denials at the time from all involved, Ponga had signed a deal with the Lions in May 2016 and made up his mind he would walk out on the game at end of that season.

It was only when Ponga was handed a shock debut by the North Queensland Cowboys during the NRL finals series later that year that he had a change of heart and realised a league career was what he wanted to pursue.

Despite having agreed to a four-year contract with the the AFL club, Lions officials were not prepared to play hardball with the teenager and wished him all the best.

South Sydney fans can only wish Ponga had taken the AFL plunge and was running out for the Lions at the Gabba against Collingwood on Sunday.

Ponga's father Andre said a big reason he joined the Knights was because ''the systems reminded us a lot of the systems in place at the Brisbane Lions''.

He still had a year to go on his contract with the Cowboys, but we were prepared as a family to have him walk away from the game

Now 20, Ponga was no stranger to Australian rules football and was part of the Lions' development programs from 15. He was invited by the Lions one year to experience what happened at an AFL combine and draft on the Gold Coast.

As a result of his exposure to the game Ponga was expected to make a smoother transition to league, unlike high-profile code hoppers Israel Folau and Karmichael Hunt.

The Lions were so determined to sign Ponga two years ago that several top-ranking club officials hopped on a plane and flew to Townsville. They had plans to turn him into a midfielder. There had been talks with former coach Justin Leppitsch and current coach Chris Fagan.

Ponga's family, including his father, mother Adine and sister Kayley, all agreed they would leave Townsville and relocate to Brisbane. It was what Ponga wanted.

The family have an unbreakable bond after enduring their share of heartache, including the tragic death of Ponga's younger brother Kacey in 2005.

Kacey was only 18 months old when he fell down an open septic tank at a local park in Mount Isa as a rugby clinic was being conducted.

The Queensland Reds were also keen on Ponga and knew all about him after he was schooled at the prestigious Anglican Church Grammar School, or 'Churchie' as it is known in Brisbane. Jason Gilmore, the Junior Wallabies coach, mentored Ponga at the school.

"But the main interest was from AFL, and had Kalyn not debuted for the Cowboys when he did, he'd be in the AFL right now,'' Ponga's father told Fairfax Media.

"He still had a year to go on his contract with the Cowboys, but we were prepared as a family to have him walk away from the game.

"From May through to October that year, we were preparing ourselves to do that.

"We have had our share of bad experiences as everyone does. But the Lions had good people. I would have been excited watching Kalyn play AFL. His mum may have been a little sceptical.''

By November of that year, though, Ponga had committed to a $3 million deal with the Knights.

The Cowboys and Broncos were keen, while there was interest from Melbourne and Parramatta. 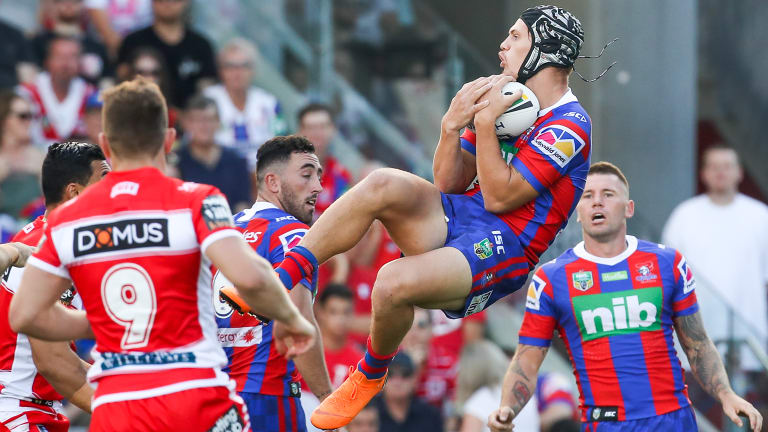 New heights: Kayln Ponga’s star is on the rise at Newcastle.

His goose step has quickly become a favourite with young fans. After the win over Wests Tigers in Tamworth a fortnight ago Ponga was the only player still spotted on the field more than 40 minutes after the game signing autographs for the bush kids.

His manager, Wayde Rushton, takes several calls a day about his star client.

Ponga has even been talked up as a bolter for Queensland.

His father Andre, a proud Kiwi, said of Kalyn’s desire to represent Australia and the Maroons: "The family supports his allegiance wholeheartedly.

"It’s KP's wish to inspire young kids, and having Maori heritage, birth and upbringing in Australia, it will allow him to reach out to everyone.''

South Sydney are aware of the challenge they face when they are greeted by the club's flame-haired fullback in Newcastle on Friday night.

Hard-hitting lock forward Cameron Murray, also 20, said of Ponga: "A lot of teams who have handled him well have handled him together, so it's not a matter of coming out of the line and trying to make a statement and hit him because he's got the ability to make you look silly.''

Souths coach Anthony Seibold added on Thursday: "It's obviously been challenging for the first eight games, because I think he's had 68 tackle breaks in eight games, which is phenomenal.

"I think the closest person to him is 43 tackle breaks and that's [Sydney Roosters fullback] James Tedesco.

"It shows how much of an influence he has had on the team.

"It's going to be important for us to put him in the foam box and don't give him too much space."