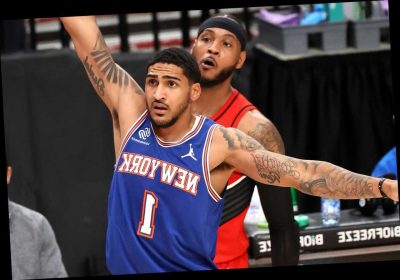 Knicks coach could be eying reunion with Bulls star

Knicks may soon have their own Big 3

The Mavericks lost their fifth straight game to fall to 8-13 and the Knicks dropped their fifth of six outings to fall to 9-13. The Knicks are now a season-worst four games under .500.

If the season ended today, the Knicks would hold the sixth and ninth seeds in the 2021 NBA Draft Lottery.

From the Kristaps Porzingis trade two years ago, the Knicks own the Mavericks’ unprotected first-round pick this year (the Dallas 2023 first-rounder has a top-10 protection).

So while the Knicks fans may soon turn to cheer on another tank, they should know full well top-nine lottery picks have as good a chance of failing as succeeding.

Ironically, one of their top young players, rookie point guard Immanuel Quickley, was taken 25th after being projected as a mid-second-round pick.

As it stands, Knox is no longer part of Tom Thibodeau’s 10-man rotation with the club now healthier than it has been all season.

Ntilikina is also out of the rotation since returning last week from a knee sprain. Smith Jr. is on his way to Orlando to play for the Westchester Knicks in the G League bubble as he’s been buried since almost the outset.

And then there is the curious case of Toppin, the No. 8 pick in November who came in with a starry resume from Dayton. The college player of the year missed three weeks with a calf strain, but returned to the rotation on Jan. 13 as a lightly used backup.

The 22-year-old power forward has made little impact with Julius Randle occupying most of the minutes. Toppin looks a little lost running around, setting screens, getting open and not getting the ball.

Toppin hasn’t shown enough strength to create his own shot. He’s also shooting just 26 percent from 3-point range – which means his future as a stretch 4 is iffy.

“He’s someone you just don’t know yet,” said one NBA coach.

In Chicago on Monday, Toppin came in for Randle to start the fourth quarter. But less than two minutes in, Thibodeau yanked him for Randle. In his 1:57 stint, Toppin committed two fouls and didn’t take a shot.

Thibodeau said the Bulls were owning the boards and he wanted Randle back into the contest. Toppin played 8:46 in the loss, scoring four points and making his lone shot attempt — an alley-oop dunk.

Thibodeau indicated Toppin’s team defense is still an issue. Clearly, Toppin missed summer league more than most rookies coming from a mid-major in Dayton, which never got a chance to show its stuff in the NCAA Tournament that was cancelled because of the pandemic.

Perhaps Toppin’s draft stock wouldn’t have been as high if he didn’t dominate the Big Dance, but we will never know that. He’s averaging 4.6 points in 12 games.

“He’s been playing pretty well,” Thibodeau said after the contest. “(Monday) we started the fourth and the rebounding was an issue. And so just all-around play. But I like the things that he’s doing, he’s playing with good energy. I’d say that’s the biggest part is him learning the NBA.”

Toppin’s defense was his issue coming out of Dayton. It’s why Cleveland went with Isaac Okoro at No. 5 when mock drafts had Toppin, the 22-year-old late bloomer, pegged to stay in Ohio.

“The defense and being a multiple-effort guy, you have to do more than one thing,” Thibodeau said of Toppin. “He may get the initial part but there’s a second, third and fourth part that has to be done also. So we’re asking him to do a lot. He’s picking it up. He’s getting better. I like his approach. Just got to keep working.”

As advertised, Thibodeau is playing the guys he thinks will help him win – regardless of lottery resume or youth or potential.

So Knox is on the outs. He’s picked up two straight DNPs and Thibodeau confirmed he’s not in the 10-man rotation. Thibodeau won’t send him to the G League, though, as he’s still knocking on the door.

“In Kevin’s situation, he’s still very much situational and things can change quickly based on matchups, fouls, injuries, illness,” Thibodeau said. “He would be the next guy in. Some of it could be matchups, too.”

The Knicks have lost two straight since Knox was yanked, giving up 129 points and 115 points, respectively. Defense is Knox’s weak spot. On Monday, the Knicks also shot just 6 of 29 from 3-point range. Knox’s specialty is the 3-ball.

Ntilikina, meanwhile, has suffered four straight DNPs since his return. He’s a defensive specialist and Thibodeau is a defensive coach.

As the Knicks nest in Chicago, waiting for Wednesday’s rematch at United Center, Thibodeau has a lot to think about.

But so do Knicks fans who think the lottery is always the path to nirvana.