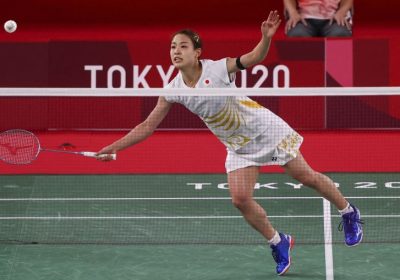 Men’s top seed Momota did not even make it out of the group stage after losing to South Korea’s Heo Kwang-hee in a stunning upset on Wednesday.

A tearful Okuhara, the former world No. 1 and world champion, urged Japan’s next wave of players to be on their guard at the 2024 Paris Games.

“There is no common reason why there have been upsets, but we all have things we need to improve on,” the 26-year-old said.

“I hope the next generation aiming to play in Paris are watching and learning that this can happen. I want the whole of Japanese badminton to look at it carefully and move forward.”

Okuhara said she “came up short” against livewire He, letting the match slip away from her after winning the first game.

“It’s a frustrating result,” she said. “I’ve got a lot of emotions right now – there’s a sense of accomplishment that it’s over, but I have to face up to the fact that this is my real level.”

“I made some mistakes, but the important thing was to adjust during the match, and that’s what I did,” said Chen.

Chinese players are unbeaten in singles play so far at the Tokyo Games, with Shi Yuqi and defending champion Chen Long still alive in the men’s competition.

“Everyone has been doing really well so far,” said Chen.

“We’ve been trained well, and also since the pandemic, our country has provided us with systematic training.”