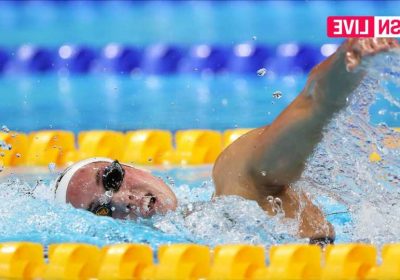 The first set of Olympic swimming gold medals will be handed out Saturday night.

The field has already experienced major shake-ups in the first round of events. Japanese star Daiya Seto missed the final of the 400-meter individual medley, while Lithuania’s Danas Rapsys (400 freestyle) and Kazakhstan’s Dmitriy Baladin (100 breaststroke) also missed the cut.

It was a great round of swimming for the Americans, however. Every swimmer and relay unit advanced to the semifinals or finals in their respective events.

There will be four finals races Saturday, including the always-thrilling women’s 4×100 freestyle relay. Be sure to keep an eye on American swimmer Emma Weyant in the 400 individual medley; she swam the top preliminary time, 4:33.55. Olympic and world record-holder Katinka Hosszu finished seventh at 4:36.01.

Sporting News will be providing live updates and highlights of each Olympic swimming event Saturday.

9:49 p.m.: The second semifinal is underway, and the swimmers compete knowing what times they’ll need to hit to reach the final.

9:37 p.m.: With Phelps watching one of his old events, Kalisz wins the gold medal in the Olympics and Jay Litherland finishes second to give the U.S. both of the top two finishers.

9:35 p.m.: USA’s Chase Kalisz has a strong performance on backstroke to come in second 0.34 seconds behind Australia’s Lewis Clareburt for the lead after back.

9:30 p.m.: Have you missed Michael Phelps at the Olympics? He’s in the booth to provide analysis for the races tonight.

With the exception of July 31, each day will begin with heats starting at 6 a.m. ET and will end with finals races starting at 9:30 p.m. ET. USA Network will carry the heats in the United States and NBC will have the finals, while CBC will provide coverage of both in Canada.

Those in the United States hoping to see replays of the qualifying heats can tune in to NBC every afternoon to see how swimmers performed earlier in the morning.