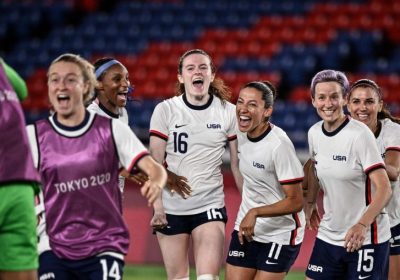 TOKYO (AFP) – Megan Rapinoe scored the winning penalty after goalkeeper Alyssa Naeher saved two spot kicks as the United States defeated the Netherlands 4-2 in a shoot-out following a 2-2 draw to remain on course for a fifth Olympic women’s football title.

Vivianne Miedema fired the Dutch ahead in Yokohoma but two quick goals from Samantha Mewis and Lynn Williams put the US in control in a repeat of the 2019 World Cup final, won by the Americans.

Miedema scored her second of the night to level early in the second half but Lieke Martens saw her late penalty saved by Naeher, with both sides having goals ruled out for offside in extra time.

The US lost to Sweden in a 2016 quarter-final but converted all four attempts this time, with Naeher denying Miedema and Aniek Nouwen to send the world champions through to a semi-final clash against neighbours Canada.

Britain appeared on course for the semi-finals as two second-half goals from Ellen White gave them a 2-1 lead after Alanna Kennedy headed the Australians ahead in Kashima.

Kerr powered in a header to extend Australia’s advantage and it proved crucial as White completed her hat-trick with five minutes to play.

Australia will meet Sweden on Monday for a place in the final. Goals from Magda Eriksson and Stina Blackstenius plus Kosovare Asllani’s penalty secured Sweden a 3-1 victory over hosts Japan in Saitama.

Canada defeated Brazil 4-3 in a penalty shoot-out in Rifu.