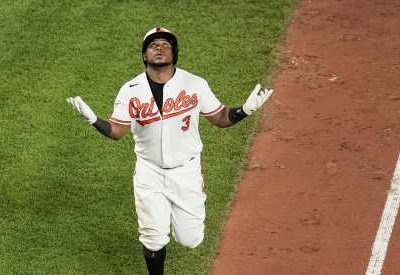 BALTIMORE — Pat Valaika described his late father-in-law as one of his biggest fans — someone who would remind him how great it can be to be a major league baseball player.

“He always told me I’m living the dream,” Valaika said. “Sometimes I take it for granted, but he was definitely with me tonight.”

In his first game back from the bereavement list following the death of his father-in-law, Valaika doubled twice and the Baltimore Orioles rolled to another high-scoring victory, 10-3 over the Mets on Tuesday night.

“He loved watching me play more than anything — he really lived for it,” Valaika said. “I knew coming back that all he would want me to do was to play.”

Maikel Franco became the sixth player to hit a home run into the second deck at Camden Yards, and Anthony Santander also homered for the Orioles, who have won five of six after a 14-game losing streak. Baltimore also hit seven doubles in the game, including two each by Valaika and Cedric Mullins.

Bruce Zimmermann (4-3) allowed a two-run homer in the first inning to Pete Alonso, but the Mets managed only one more hit off him in five innings. David Peterson (1-5) yielded four runs and eight hits in two and two-thirds innings.

Baltimore outhit the Mets by 16-4 after scoring 18 runs with 21 hits in Sunday’s victory over Cleveland.

“I thought tonight we took really good at-bats,” Orioles Manager Brandon Hyde said. “Once again, up and down the order, a lot of production from the bottom half of the order.”

Alonso added a second homer in the ninth, making him the first Mets player with a multi-homer game this season.

Valaika tied the game at 2-2 with a two-run double in the second, then scored on a double by Mullins. Valaika doubled home another run in the third.

Mullins led off with a double in the fourth — at that point, he had 11 hits in his last 13 at-bats — and scored on a single by Trey Mancini.

Mets Manager Luis Rojas said the plan is still for the struggling Peterson to make his next scheduled start.

“We need to get him right,” Rojas said. “We need David Peterson.”

Franco broke the game open with a three-run homer in the fifth that went down the line in left field and into the second deck. He was the first player to hit a home run into that level since Alonso last September. Mark Reynolds in 2011 and Manny Machado in 2017 were the only Baltimore hitters to do it previously.

Santander hit a solo homer in the eighth.