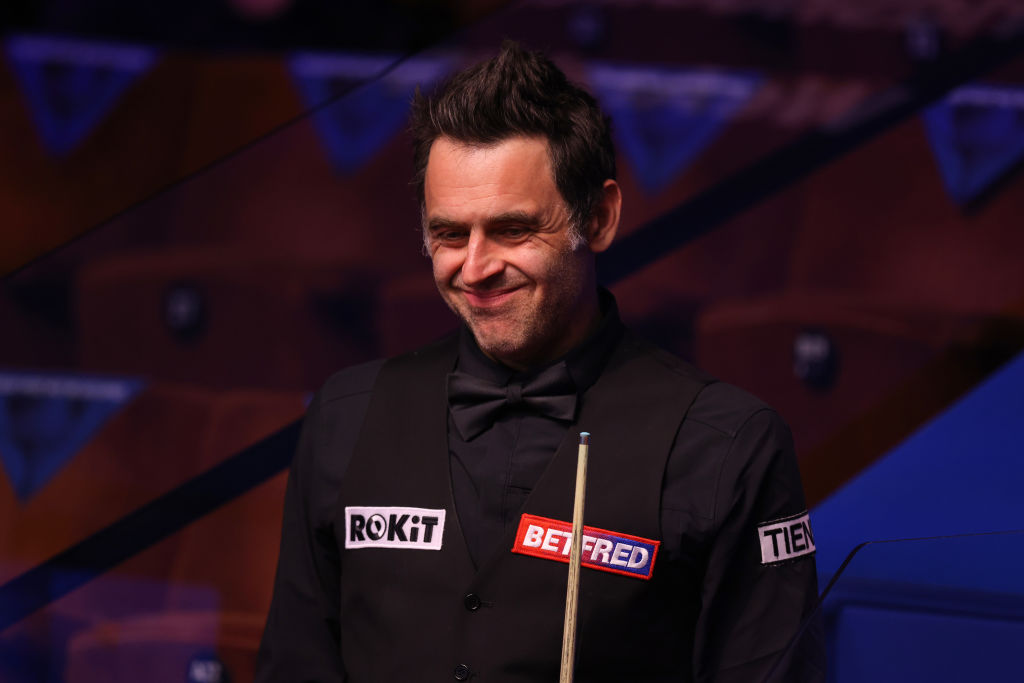 Ronnie O’Sullivan was in playful mood after beating Dave Gilbert in the first round of the World Snooker Championship, saying he would like to not match Stephen Hendry’s Crucible record, aiming for a body like Arnold Schwarzenegger, putting on a pair of glasses and having a pop at Hossein Vafaei.

The Rocket was in good form in a high quality match against Gilbert, who had taken a 3-0 lead before the six-time world champ started to turn it on.

The 46-year-old made three centuries and the Angry Farmer did little wrong, but could not stop the relentless march to victory for the Rocket.

In the post-match chat, O’Sullivan was quick to dismiss talk of a Hendry record-equalling seventh world title this year, not wanting to wind up Vafaei, who sensationally claimed pre-tournament that the Rocket is bad for snooker and should retire.

‘You should know now I’m not really bothered about records and such like that,’ O’Sullivan told the BBC. ‘Everyone talking about the seventh, Hendry’s record, but he was a hero of mine, I’d actually quite like him to keep one of them records.

‘I’ve got enough records. I won’t start going on about them or Hossein Vafaei might get the hump.

‘I’ll stay humble and say I’m here to enjoy my snooker, have some fun and enjoy the ride.’

Next in the firing line of the Rocket was World Snooker Tour, who he thanked for ‘making his life hell’ which has allowed him to focus on other pursuits away from the sport.

‘I’ve been on great form for the last six or seven years. I just want to thank World Snooker for making my life hell, to actually find myself a life where I can just put up with whatever goes on,’ he continued.

‘I’ve got myself in a great position now because I had to, whether I win or lose.

‘If I lost today I’d have been disappointed because I’m actually enjoying playing out there, but I could have took a defeat and got over it. Been in the punditry box and been okay with it.

‘If I can be around, be a hindrance, a lot of these guys who are past their best, still a pain to deal with sometimes.’

The six-time world champion then revealed he intends to switch from his running obsession to pumping iron as he reaches the half-century, aiming for a more Schwarzenegger-esque physique.

‘I’m trying to change my gym work, instead of running so much, do some weights to strengthen my bones up and my body,’ he said.

‘I look at a lot of 50-year-olds they look a bit old and fragile. I was speaking to Barry McGuigan who said as you get older, maybe the weights are the way forward.

‘If I intend to play that long I need to look at how I train, instead of running, I need to start looking a bit like Arnie.’

Adding to the somewhat chaotic chat, the Rocket then pulled out a pair of glasses, placed them on his face and explained that they are actually headphones.

‘I’m just going to put my glasses on so I can be matching you,’ Ronnie told Rob Walker. ‘Who’s got the best glasses me or you?

‘These are actually headphones, I can take some phone calls, listen to my music. You need to get a set of these, Rob.’

O’Sullivan returns to action on Friday against Mark Allan or Scott Donaldson in the second round.

For more stories like this, check our sport page.