Home » Sport » Pac-12 media rights: Kliavkoff sees no need to rush, but that is risky

Pac-12 media rights: Kliavkoff sees no need to rush, but that is risky 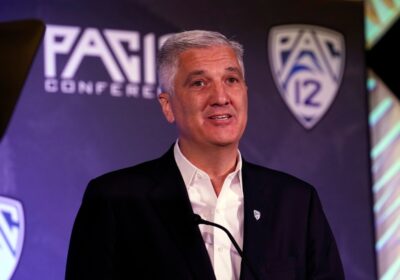 On a Wednesday afternoon in early December, Pac-12 commissioner George Kliavkoff took the stage at an intercollegiate athletics forum in Las Vegas and addressed the timing of a media rights deal for his conference.

“No need for a rush,” Kliavkoff said.

“We’re in a good position,” he explained.

There was no “sense of urgency,” he added.

Six weeks later — and 202 days since USC and UCLA announced their plans to enter the Big Ten in 2024 — the Pac-12 still does not have a media deal.

It needs one, soon. How soon? Fixing a date is a fool’s errand, but a targeted timeframe isn’t unreasonable. So here’s our window: The conference needs a deal by March.

If the process bleeds into the spring, anxiety on the 10 remaining campuses will soar. Presidents and athletic directors will seek escape hatches. Options that once seemed untenable will grow more attractive.

“The Pac-12 cannot get overconfident,” said a Hotline source in the sports media space. “If we know anything about college sports, it’s that you can’t assume the status quo will last.”

The Big 12’s media rights deal with ESPN and Fox, secured at the end of October, will pay each campus $31.7 million annually, which tracks with the Pac-12’s expected valuation.

— It doesn’t appear the Big Ten presidents possess the motivation or desire to add Oregon, Washington and the Bay Area schools to join USC and UCLA in a western division.

— It doesn’t appear the Big Ten’s media partners have the cash on hand — we’re talking hundreds of millions of dollars annually — to keep the 16 members whole while adding four more schools from the Pac-12.

Fox, NBC and CBS already have what they coveted from the West Coast. They have USC football and a fence around the L.A. market.

— The departure of Big Ten commissioner Kevin Warren, who was named president of the Chicago Bears last week, removes a chief proponent of additional expansion.

Combine a leaderless Big Ten with the lack of transformative revenue in the Big 12 and the expanding College Football Playoff — each Power Five champion is effectively guaranteed a berth — and it appears stability has taken root.

The remaining Pac-12 schools either have nowhere to go, no reason to leave, or both.

And Kliavkoff is correct in his strategic assessment of the landscape, for the conference has backed into an advantageous position.

The Big 12’s move to secure an early renewal of its partnership with ESPN and Fox left the Pac-12 as the lone member of the Power Five with football inventory available for the next eight years.

If ESPN, Fox or CBS want more, there is only one place to go.

If Turner, Amazon or Apple want some, there is only one place to turn.

Given the soaring value of live sports in a crowded media marketplace, the Pac-12’s rights theoretically will be more valuable in six or nine months than they are today.

No wonder Kliavkoff feels “no sense of urgency.”

But you know when the realignment knife strikes? When it’s least expected.

When you think the Big Ten’s presidents are content with 16 and its media partners are out of cash.

When you think the Big 12 isn’t enticing.

When you think the CFP expansion has calmed the waters.

When you think — ahem — that USC has no plans to join another conference.

In realignment, presumptions are the kindling for crisis; confidence is the agent of destruction.

Kliavkoff needs to get a deal done sooner than later.

“If you slow-play it,” the source said, “you become vulnerable to the unknowns.”

What if the economy plunges into a full-blown recession and Amazon exits the negotiations?

What if Fox changes its strategy and decides “Big Ten West” has a nice ring to it?

What if the Arizona and Mountain schools grow anxious and opt for security in the Big 12?

None of those options seem logical now, but there is nothing logical about realignment until you’re faced with an existential crisis.

That, folks, is the lesson of realignment: Assume nothing.

The Hotline understood Kliavkoff’s preference to wait for a final decision on UCLA’s fate from the University of California Board of Regents, even though the process went longer than expected.

And in his few public remarks on the negotiations, Kliavkoff has been careful to avoid setting a date. For all we know, he plans to present the university presidents with a contract by the end of the month.

Also, we should acknowledge the possibility of favorable unknowns developing — of time providing a chance for new players to enter the negotiations and push the price of Pac-12 content higher.

Maybe tactics change at the corporate level at Fox or CBS or Turner.

Maybe the economy gains strength in the fourth fiscal quarter.

Slow-playing the process could prove advantageous, but is that the most likely outcome? Not from where we sit.

The upside reward that could result from extending negotiations into the spring — and allowing marketplace dynamics to generate a few extra million dollars per year for each Pac-12 campus — is not worth the downside risk.

Because the downside risk is extinction.

There is no logical reason to rush this process, and that’s the very reason to hurry.

*** Pac-12 Hotline is not endorsed or sponsored by the Pac-12 Conference, and the views expressed herein do not necessarily reflect the views of the Conference.