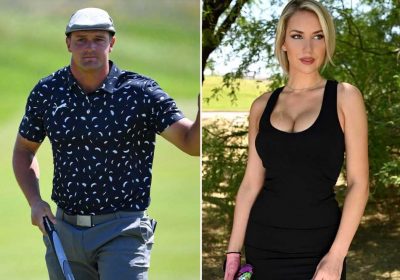 This wasn’t easy day for many big-name golfers

Paige Spiranac isn’t buying Bryson DeChambeau’s driver comment as the reason for his first-round woes at the British Open.

On Thursday, the eight-time PGA Tour winner said his Cobra brand driver “sucks” when asked how he felt about his 1-over-par 71 after hitting four-of-14 fairways at Royal St. George’s.

“Just saying it’s not great if you’re paying someone a lot of money and they say your driver sucks just because they can’t find the sweet spot,” Spiranac tweeted amid the controversy, which prompted a fiery response by a representative from Cobra Golf.

“We already know Brooks (Koepka) is going to have a Cobra driver in the bag next week,” Spiranac, who has been a critical of DeChambeau in the past, said in a followup tweet.

In his initial comments, DeChambeau attempted to explain his struggles at the Open and complained about his Cobra driver.

“It’s not a good face for me, and we’re still trying to figure out how to make it good on the mishits. I’m living on the razor’s edge like I’ve told people for a long time. When I did get it outside of the fairway, like in the first cut and whatnot, I catch jumpers out of there and I couldn’t control my wedges,” he said.

“It’s quite finicky for me because it’s a golf course that’s pretty short, and so when I hit driver and it doesn’t go in the fairway, it’s first cut or whatever, or it’s in the hay, it’s tough for me to get it out on to the green and control that. It’s kind of living on the razor’s edge, and if I can’t figure it out,” DeChambeau explained.

“Everybody is bending over backwards. We’ve got multiple guys in R&D … trying to get this and that into the pipeline faster. [Bryson] knows it. It’s just really, really painful when he says something that stupid,” Schomin told Golfweek, comparing the situation to “an 8-year-old that gets mad at you.”

Schomin went on to explain that it’s a challenge to please DeChambeau.

“He has never really been happy, ever. Like, it’s very rare where he’s happy,” he said, later adding, “He didn’t really mean to say it that harshly. He knows how much everyone bends over backwards for him, but it’s still not cool.”

DeChambeau took to social media to issue an apology and said his emotions got the best of him.

“I sucked today, not my equipment,” he said, noting his five-year relationship with Cobra. “Their team is like family to me, especially Ben Schomin, who has been there for me every step of the way since I started my career. I deeply regret the words I used earlier.”

With the week DeChambeau’s having, it’s hard not to wonder what Brooks Koepka is thinking.