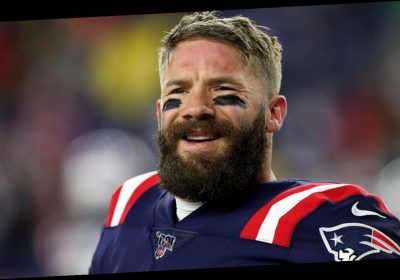 A year after only playing in six games, Julian Edelman’s 2021 season is already in doubt.

According to the Boston Herald, Edelman is uncertain to play this year due to a knee injury. Edelman, once a Super Bowl MVP, began his career with the New England Patriots in 2009. He was a key piece to three championships in New England, but the 35-year-old’s career has gone in a downward spiral due to significant injuries.

The report stated that surgery could provide temporary relief for the wide receiver but nothing will solve the underlying matter. In October, Edelman had a procedure done to relieve some issues, but he was never able to return to the field, despite playing in some practices.

The Herald also reported that the knee could allow Edelman to play in one game, but be gone the next due to the injury. The Patriots wideout has a $6.1 million cap hit this season, which means the team could part ways with him, especially since he only has one year left on his contract.

New England signed wide receivers Nelson Agholor and Kendrick Bourne earlier this offseason, as well as tight ends Jonnu Smith and Hunter Henry, all of whom could be fantastic weapons for quarterback Cam Newton, who was also brought back on a one-year deal.

The Patriots missed the playoffs for the first time in 11 years, but they have a good chance at rebounding in 2021 with the coronavirus pandemic no longer a distraction, and a full offseason under Newton’s belt as the starting quarterback.