Pete Rose weighs in on Astros' sign-stealing scandal: 'I didn't taint the game' The Houston Astros fired manager A.J. Hinch and general manager Jeff Lunhow for their roles in the sign-stealing scandal during the 2017 season in which they won the World Series. The team has also lost its first- and second-round draft picks for the 2020 and 2021 drafts and will be fined $5 million, according to The Athletic.

Rose told NJ.com that he believes that his transgression was less severe than that of the Houston Astros, who set up a video camera in center field at Minute Maid Park and connected it to a video feed in the clubhouse. Players or team employees would then alert Astros batters to whether the opposing pitcher was throwing a fastball or a breaking ball.

“I bet on my own team to win. That’s what I did in a nutshell. I was wrong, but I didn’t taint the game. I didn’t try to steal any games. I never voted against my team. I bet on my team every night because that’s the confidence that I had in my players. And I was wrong,” Rose said. 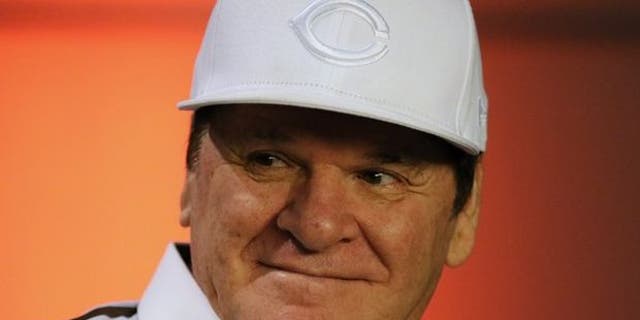 Rose was banned from baseball for betting on games as a manager.
(AP Photo/Gary Landers)

“But this is a little different. It’s a lot different, actually, and I think that’s why the commissioner came down so hard.

Rose supported MLB Commissioner Rob Manfred's decision to suspend Astros manager A.J. Hinch and GM Jeff Luhnow for a year as well as taking away Houston’s draft picks and fining them $5 million. Hinch and Luhnow were then fired.

“So they fire the GM, they fire the manager, and [MLB] probably is going to get [Red Sox manager] Alex Cora, who was the [Astros] bench coach at the time,” Rose told NJ.com. “But what about the players who were behind this and taking the knowledge? Should they get off scot-free?

“Don’t you have to do something to the players who were accepting the stolen signs? Nothing’s been done. Is that fair?”

The Boston Red Sox fired Cora on Tuesday. Manfred ruled that Cora played a key role in devising the sign-stealing scheme. New York Mets manager Carlos Beltran, who was on the Astros, was the only player on the 2017 Astros team that was implicated in the ruling, but Manfred said Beltran would avoid discipline because it was impossible to know all of the players who were stealing.

“What’s going to happen to Beltran? Can he manage the Mets now? He was a ringleader, right?” Rose asked. “This whole thing … it’s getting technical. I just can’t imagine how many people are really involved. I can’t imagine doing something like that.”