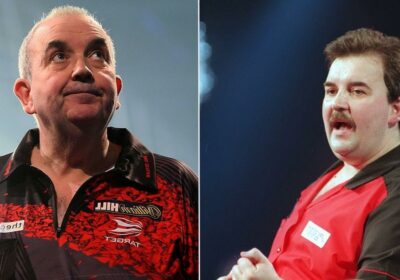 Offbeat news from the world of sport

Phil Taylor has given his backing for a new tournament dubbed darts’ version of football’s Championship.

The MODUS Super Series launched earlier this month and features a host of household names, including Martin Adams, Fallon Sherrock and Kevin Painter, as well as lesser-known players looking to make their mark in the sport. The tournament is only open to non-PDC Tour card holders.

Each week, 12 players compete in a series of group matches from Monday to Friday, with six qualifiers facing off in front of a live audience at Finals Night every Saturday evening. After 13 weeks, the 12 previous weekly winners compete in Champions Week to be crowned the MODUS Super Series champion and receive a £20,000 champion’s prize.

Broadcast live on YouTube between Monday and Saturday from a purpose venue in Portsmouth, formally a derelict church, matches are timed so they don't clash with top football matches and other big sporting events.

Sixteen-time world champion Taylor is hugely impressed with the set-up and wishes a similar competition had been around at the start of his career.

“When you think that it was a derelict church, they've hired it for five years and they've done all this work,” he said. “It's absolutely fantastic, it really is. They've put a lot of effort into it, and that's why I think it's going to be really successful.

What's your favourite Phil Taylor moment? Tell us in the comments section below.

“The concept is fantastic. For the players now, the semi-professionals I'd say, the opportunity for them is there to earn themselves a few quid. Especially this time of day and age, where everything's going up, gas and electric bills and everything else. This is where they can make a good future for them and their families.

“It's hard work but it's going to be brilliant for them. I wish I was starting again, I really do. Even though I've had a fantastic career, this is a great opportunity for anybody that's just up and coming now."