Home » Sport » Pizza and The Inbetweeners: How Aussie cricketers plan to celebrate

Pizza and The Inbetweeners: How Aussie cricketers plan to celebrate Thrust into the top job amid the fallout from one of the lowest moments in Australian cricket's long and storied history, Tim Paine couldn't have been prouder of his team's monumental effort in Dubai to secure an unlikely draw in the first Test against Pakistan.

Paine led from the front superbly as the tourists dug in for an unprecedented 140 overs to save the game and keep alive their hopes of winning the two-Test series. 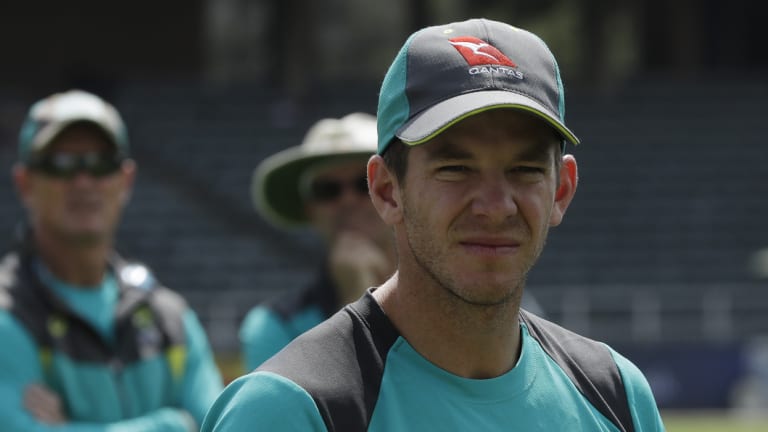 Low-key: Australian captain Tim Paine expressed his delight at the team’s effort to grind out a draw.Credit:AP

Chasing a world-record 462 to win, Australia had been on course for a humbling defeat after losing 10-60 in the first innings and suffering another collapse in the second dig.

But man-of-the-match Usman Khawaja ground out a magnificent 141 and Paine scored an unbeaten 61 to shepherd Australia through a perilous final hour.

Paine took over as Test captain following the stunning revelations of ball tampering in Cape Town which led to Steve Smith, David Warner and Cameron Bancroft all receiving suspensions.

The depleted Australian squad was expected to struggle in the UAE, but Paine could hardly have asked for a more spirited display to begin his first full series in charge.

"We spoke pre-series about the need to really fight here and show real patience," Paine said.

"It's one thing to talk about it, it’s another thing to do it after you’ve had a 10-60 collapse. That can shake a few people's belief.

"We never lost hope that we could do that today. There were probably times where it was a bit of a dream.

"We just fought, dug in and played a brand the Australian cricket team wants to play."

Australia will take plenty of positives from the start of their new era under Paine and coach Justin Langer.

Aaron Finch fell one run short of making half-centuries in both innings, while fellow debutant Travis Head scored 72 in the second dig. 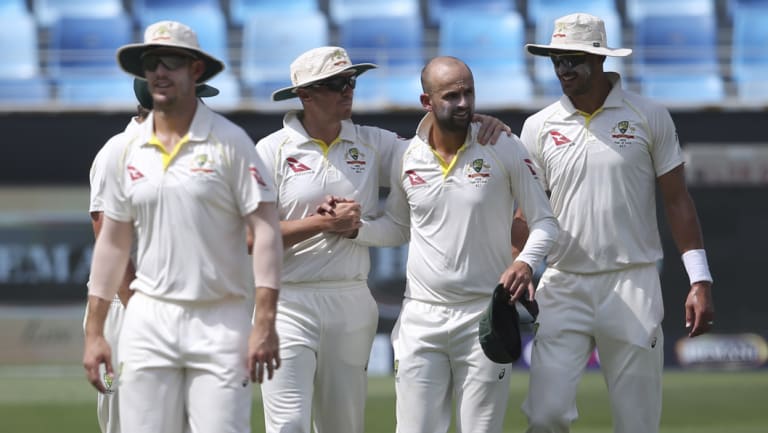 Nathan Lyon (second right) is planning a quiet night with his skipper.Credit:AP

Marnus Labuschagne failed to get among the runs in his maiden Test, but took crucial wickets with his part-time legspin and impressed in the field.

"We know that to become a good team, we first have to be hard to beat," Paine said.

Paine revealed he and Nathan Lyon, who together survived the final overs, planned to celebrate in low-key fashion.

"Apparently we're going to order a pizza tonight, go down to the team room and put The Inbetweeners on. That's our reward," Paine said.

"That's what got us through the last six or seven overs."