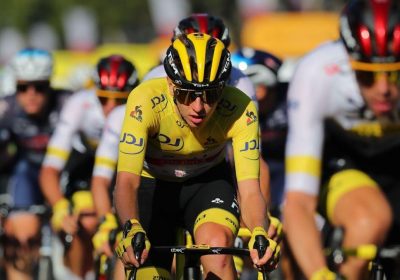 PARIS — Tadej Pogacar won the Tour de France for a second straight year after a mostly ceremonial final stage to the Champs-Elysees on Sunday in cycling’s biggest race.

The 22-year-old Pogacar won his first title last September when he became the Tour’s youngest champion in 116 years. He is now the youngest double winner of the race.

The mostly flat 108-kilometer (67-mile) leg began in Chatou just outside Paris and concluded with eight laps up and down the famed avenue.

Pogacar and his teammates rode at the front of the pack together as they reached the Champs-Elysees, and the Slovenia champion raised his fist in the air in celebration.

Pogacar’s gesture acted as a signal for those fighting for a prestigious stage win as the first accelerations took place. But the attackers’ efforts did not pay off and the stage ended in a mass sprint.

Cavendish, who consoled himself with the best sprinter’s green jersey, banged his handlebar in frustration after van Aert edged Jasper Philipsen to the line. Cavendish was third.