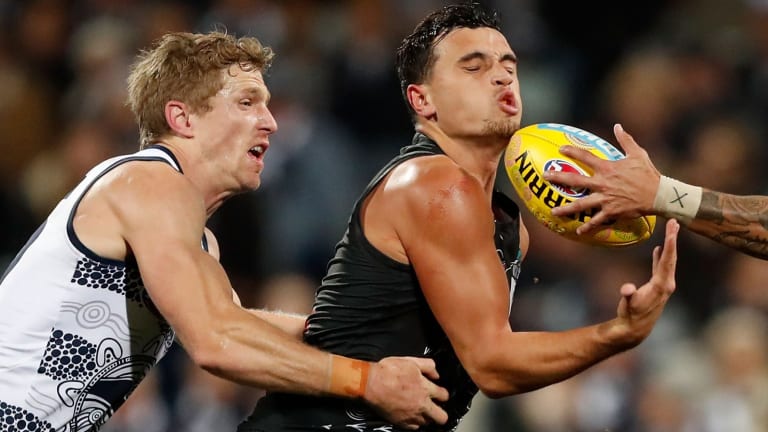 Port Adelaide young gun Sam Powell-Pepper is expected to miss a third game this weekend, but to have the wording of his misconduct charge amended in a deal between Port and the AFL over an incident involving a woman at a night spot.

The AFL have already decided Powell-Pepper is guilty of ‘‘conduct unbecoming’’ under the league’s new respect and responsibility policy.

But the player and Port have fought the AFL over the process – and the language used to describe his charge, with a compromise likely to be reached before Port’s game against North Melbourne on Saturday.

At one point, Port Adelaide was pushing for Powell-Pepper to be allowed to play this week. This now appears unlikely and he is expected to sit out for a third game as a result of his drunken behaviour, which led to Port suspending him for the round four game against Essendon for breaching team protocols around curfew and then the player volunteer to sit out the game against the Cats.

The fight over the wording of the finding against Powell-Pepper is based on the club’s view – made in concert with legal advice – that the player should not have his reputation damaged in the long term when the evidence about what took place is debatable and not clear cut.

The player and club have resisted wording that suggested sexual misconduct or harassment, with Port chairman David Koch voicing his concern about the AFL’s process and a number of lawyers called in – including the AFL Players’ Association’s.

Powell-Pepper was accused by the young woman of inappropriately touching her when he was drunk following the club’s third-round victory over Brisbane. The player and club position, however, is that while there is footage of this incident on the Adelaide night spot’s CCTV, it is not conclusive.

The AFL, clearly, believes there is sufficient evidence for the charge to be sustained, its integrity unit having interviewed the woman, Powell-Pepper and others who were present on that Saturday evening. The woman did not take the matter to the police. The Powell-Pepper incident is a kind of test case for the AFL’s revised respect and responsibility policy – under which the AFL can discipline players and officials for mistreatment of women and is designed to improve behaviours, but is complicated by the legal rights of the player and the potential for police involvement.

Richmond’s Nathan Broad was investigated by the AFL and suspended for three matches for distributing a topless photograph of a woman – which found a wide audience on the internet – after the grand final in another respect and responsibility case that dragged on.