Port Adelaide chairman David Koch has launched a sensational attack on the AFL for its handling of the Sam Powell-Pepper case.

After a lengthy investigation by the AFL’s integrity department, Powell-Pepper was handed a three-game suspension on Wednesday for engaging in inappropriate behaviour with a young woman at a nightclub. 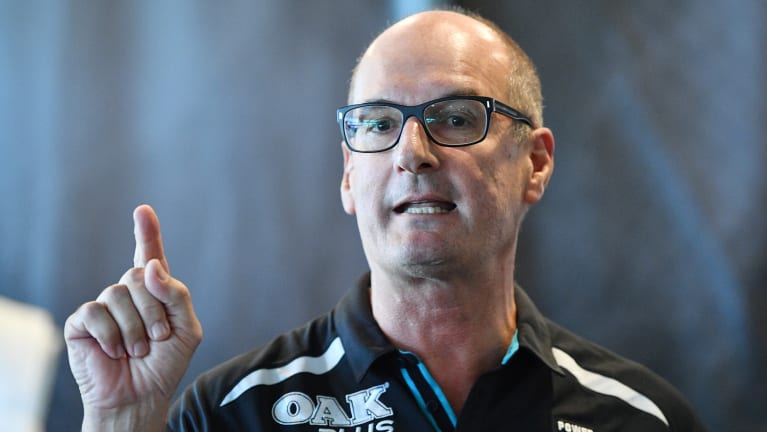 David Koch has unloaded on the AFL’s handling of the Sam Powell-Pepper investigation.

The youngster has already missed two games, so he will be available for selection in round seven.

However, in an extraordinary statement released to Triple M, Koch slammed the manner in which the league dealt with the case and claimed that, in handing Powell-Pepper a lengthy suspension, they had overcompensated for the inappropriate relationships that sacked executives Simon Lethlean and Richard Simkiss had with junior female employees.

“The whole respect and responsibility policy leaves the clubs in the dark,” Koch said.

“They [AFL] take complete control, I issued them with a grievance notice before they would start talking sense.

“My biggest issue was they were trying to railroad a kid in trying to rebuild their reputation with women because of the misdemeanours of their own former executives.

“In Sam Powell-Pepper’s case a woman anonymously made claims, did not press charges with police – which we were happy for her to do – and we have vision of the entire night and the head of the integrity unit refused to see it.

“I’m putting it on the agenda at next presidents’ meeting.”

However later in the day, Port Adelaide CEO Keith Thomas said he did not feel as though the AFL were driven by another agenda during the investigation and contradicted the Port Adelaide chairman when he revealed that AFL investigators had viewed the vision of the night.

Thomas blamed the initial Channel Seven report on the incident for setting the tone for the investigation, which "created an environment where it has been very difficult to achieve fairness in this hearing".

He said the length of suspension became irrelevant to the club however the wording of the charge leading to the penalty was important, with both parties eventually agreeing on using the term "inappropriate touching".

"We chose to accept the finding out of respect for the process," Thomas said.

Thomas refused to say what the video footage showed but he accepted, after negotiations around the wording, the AFL's finding.

"We accept that inappropriate touching is a matter of personal opinion and it is subjective. I don't know if it is respectful to delve into that too greatly," Thomas said.

He also said the incident was a massive lesson for Powell-Pepper.

"Sam put himself in a position where bad things can happen and he needs to learn from that," Thomas said.

Powell-Pepper apologised on Channel Nine in Adelaide on Thursday for his actions.

"I've let my team and my club down, so I can't be sorry enough," Powell-Pepper said.

"I've made her feel uncomfortable and I'm very sorry for that."

Powell-Pepper is free to play in the SANFL while serving the remainder of his AFL suspension.