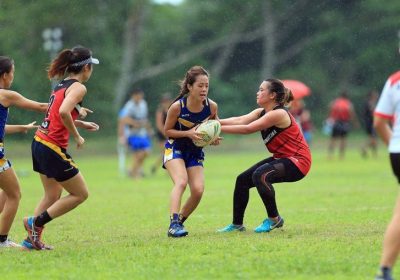 SINGAPORE- Making her way to the Tanglin Rugby Club Fields, Marianne Ching only had one thing on her mind: she was finally able to play in a competitive league after an 18-month hiatus.

Touch Singapore’s (TSG) 4v4 Singlife Touch League kicked off on Saturday (Feb 20) at Turf City. The league will be held every Saturday over eight weeks, with the finals slated for Apr 17.

A total of 148 teams of four will compete in a round robin format across 11 divisions with the top 20 moving onto the finals.

The 24-year-old Ching, who plays for local club Honey Badgers, said: “Being back on the field again made me feel very sentimental… seeing faces old and new, I felt that Touch was back, even in a different format.”

But unlike previous competitions where between 1,200 to 1,500 people could spend a whole day at the grounds cheering for their teams, due to safety regulations in place, this year’s league was off to a quiet start.

Bedok Kings’ Angela Zheng said: “The social aspects of the competition was very different. The excitement and energy was still there, but very much muted.

“When seeing someone we knew, it was mostly waving and gesturing from a distance.”

Games are now played in the modified 4v4 format with no substitutions and consist of four six-minute quarters. The previous format was 6v6 matches and two 20-minutes halves with eight rolling substitutes for each team.

Solihin Mansor, who plays for club Eurostep, pointed out that the revised game time and lack of substitution proved to be a challenge.

“It was definitely more hard work. We had to learn to pace ourselves and it finally got better towards the end of the game.” explained the 22-year-old.

As part of safe distancing guidelines, teams are only allowed to enter the venue 20 minutes before their scheduled match and have to leave within 15 minutes of their last match through stipulated entry and exit points. Attendance is taken and teams are encouraged to bring their own rugby balls.

Despite these changes, players were thrilled to be back on the field. Udon club player Lai Chien Siew said: “We are all happy to just have a good run on the field after so long and to continue enjoying the sport in a safe manner.”

Ching added: “We definitely want to have fun in the upcoming matches, but to have fun, we will want to win. After today’s match, we will be training harder and pushing ourselves a lot more.”