Home » Sport » 'When it rains, it freaking hails': how Taupau is weathering the storm at Manly

'When it rains, it freaking hails': how Taupau is weathering the storm at Manly Amid all of the off-field drama that has engulfed Manly, Martin Taupau has tried to keep things so real that he's defying the long-accepted laws of rugby league mathematics. 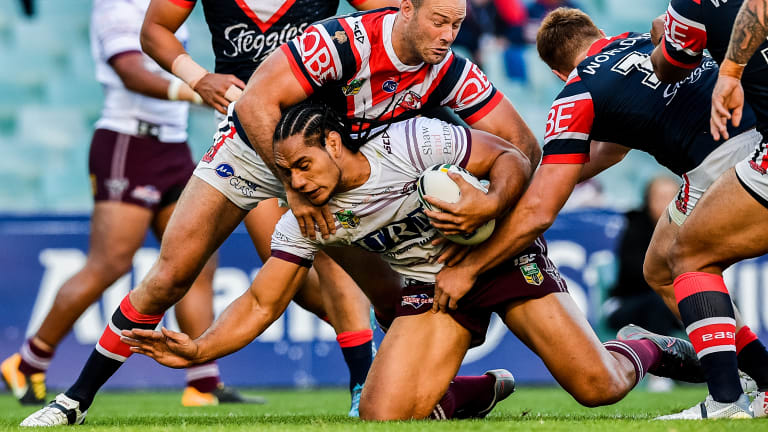 Giving his all: Martin Taupau has remained a colossus in the Manly forward line despite the Sea Eagles’ faltering form.

Dispensing with the sacred extra 10 per cent may be a controversial move but elsewhere, Taupau's numbers have stacked up. The prop ran for whopping 290m in a close loss to the Roosters, a game he believes may have turned Manly's season around after five defeats on the trot.

"There were some awesome signs, just with our intentions and set plays, the positioning and communication. There's a great vibe, it's all there. It's close," Taupau said at the launch of the NRL's Indigenous Round in Brisbane on Monday.

"Last (Sunday) night, not taking anything away from the Roosters, but it was a good night for us. Statistically, we ran 400m more than they did, we did less tackles, were fresher. But the unforced errors got us. That killed us. But a win is just around the corner for us."

After being 2-2 through four rounds, Manly's season has been in freefall. Off the field, they have been haunted by salary cap issues, an altercation between Daly Cherry-Evans and Jackson Hastings, player departures and uncertainty around the ownership.

"You win some and you lose some in rugby league. And when it rains, it freaking hails. It's not all sunshine and rainbows. We have a fair way to go," says Taupau on the current state of the Sea Eagles.

"But there's a lot of character, especially with our leadership and showing the young players what to do in this situation. It's really helped us as a club."

He's emphatically backed coach Trent Barrett, saying he remains the right man to lead Manly back to the Promised Land. The players, he said, have to take the lion's share of the blame for performances.

"With Trent Barrett, it's just like a young player on debut. You don't always have your best game but that's been a rarity. As time as on you progress and understand the things you need to improve on. That's just a part of life.

"Baz and the coaching staff come up with the structures and we go out and try to execute that. We're the ones out there, it's not Trent Barrett."

Taupau had a ding-dong battle with young Roosters firebrand Victor Radley on Sunday but won't give it a second thought after the fulltime siren, nor has he obsessed about the controversy that seems to confront the Sea Eagles at every turn this season.

"The simple way to put it is when I go to work, I go to work. When I clock off, I go home where I have an amazing fiance. I have so much love and happiness there. That's what kept me grounded and what drives me to be the very best," Taupau said.

"(But finals) are a possibility. It is a possibility. But we do have a long way to go, we're nearing the halfway point of the season. We need to go up a notch and get everything sorted ASAP."

Taupau joined players from every club in showing off their one-off indigenous jerseys during the launch at Suncorp Stadium. Heritage and culture are hugely important to him; Samoan was his first language and he still speaks in fluently.