Rangers could have Tony DeAngelo trade partner in Flames 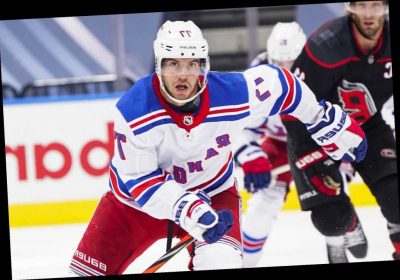 Long Island native’s first goal as a Ranger was ‘magical’

Rangers hope to build on momentum as huge test approaches

The Flames are conducting due diligence on Tony DeAngelo and have expressed at least preliminary interest in the Rangers’ excommunicated defenseman, The Post has confirmed.

It is believed that Sam Bennett, the fourth-overall selection of the 2014 draft, who has at least temporarily fallen out of favor, has been a topic of conversation between the teams.

Bennett, who can play center or wing, has been designated as a healthy scratch for the Flames’ match at Winnipeg on Thursday after having recorded just one point (an assist) in the first nine games. He has primarily played on the wing, averaging 13:20 on a line with Mikael Backlund and either Josh Leivo or Andrew Mangiapane.

According to sources, the Flames have not yet made the definitive decision to move on from him.

Calgary is among several teams that have inquired about DeAngelo, who is in virtual taxi-squad land after clearing waivers in the wake of his Tussle in the Tunnel with Alexandar Georgiev following the Rangers match Saturday night against the Penguins. Some, though, have offered bad contracts in return. The Rangers have little to no interest in saddling themselves with an onerous obligation in order to ease DeAngelo out of the organization.

Bennett, whom the Rangers likely would envision either as the second-line right wing alongside Artemi Panarin and Ryan Strome or their defined third-line center, will become a restricted free agent with arbitration rights following this season in which he accounts for a $2.55 million cap hit. His number next season will likely be in the $3 million to $3.3 million range.

DeAngelo, of course, is three weeks into a two-year deal carrying an average annual value of $4.8 million. It is unknown whether the Rangers would be required to make up the difference — or more — by retaining a portion of the salary or by taking back another contract.

Multiple sources have said general manager Jeff Gorton has little interest or incentive at this point to take on excess money simply to expedite the process. There is going to be some pressure at some point, though, to move DeAngelo.

Even though it is true he would be subject to a one-third buyout over the summer that would add merely $383,333 of dead space to next year’s ledger and a reasonable $833,333 to the cap in 2022-23, it is not clear the Rangers can simply keep him at home the remainder of the season if they cannot pull off an equitable deal.

The team is working with DeAngelo’s representative, Pat Brisson of CAA, to help facilitate a trade, but at some point the process could become adversarial if the defenseman is kept off the ice for a lengthy period of time.

If Calgary’s interest is legitimate and management receives positive reports, it would likely behoove the Flames to move quickly since DeAngelo would be subject to a 14-day quarantine in crossing the border.