Home » Sport » Rays Rely on a Bullpen With a Simple Aim: Throw It Over the Plate

Rays Rely on a Bullpen With a Simple Aim: Throw It Over the Plate ARLINGTON, Texas — The baseball gods might have sent the Tampa Bay Rays to the World Series just to prove a point. The Rays are tied with the Los Angeles Dodgers after two games, pursuing the first championship in their 23 seasons while squashing last year’s story line.

Remember when the World Series was a festival of aces, three apiece for the Washington Nationals and the Houston Astros last fall? Five of those starters earned at least $23 million per year, and the other, Gerrit Cole, would soon sign the richest contract ever for a pitcher: $324 million for nine years with the Yankees. Building a team through its rotation, it seemed, was the best way to win it all.

Now consider the Rays, who had the best record in the American League (40-20) despite getting only nine starts all season that lasted at least six innings. That was the lowest total in the majors, tied with two last-place teams, the Boston Red Sox and the Detroit Tigers. Excessive bullpen use is supposed to be a bad thing, but not for Tampa Bay.

“This is the best bullpen group we’ve had maybe ever,” said Stan Boroski, the Rays’ bullpen coach, “and we’ve had a lot of good bullpens.”

Boroski, 57, is the Rays’ longest-tenured coach, with 11 years on the staff. He played five years in the minors in the 1980s, turning to pitching after batting .169 as a catcher. He was better on the mound, but he never escaped Class A.

“I wasn’t very good, very mediocre stuff — but what I did learn is that strikes are your friend,” Boroski said. “Any success that I did have in the minor leagues was because I threw the ball over the plate. Never be afraid of contact. Your best chance of getting an out is the hitter putting the ball in play. Relentlessly attack the strike zone.”

Kevin Cash, the Rays’ manager, gave the bullpen an identity in September, referring to his “stable of pitchers that throw 98 miles per hour” as a warning to the Yankees for throwing high and tight. And while several relievers do throw hard, the bullpen does not depend on strikeouts.

Rays relievers ranked 13th in the A.L. in strikeout percentage, with 8.78 per nine innings, but best in walk percentage, with just 2.9 per nine innings. The team is 34-0 when leading after seven innings — postseason included — and when Pete Fairbanks earned his first of three postseason saves, he became the 13th Tampa Bay pitcher with a save this season, the most of any team in history.

“It’s just a matter of getting strike one, getting strike two,” said John Curtiss, who has helped Tampa Bay hold the lead in three October victories. “As Stan likes to say, there’s never been a pitcher who’s been better behind in the count, and there’s never been a hitter who’s better when he’s behind in the count. It’s just trying to exploit that count-leverage matchup.”

Curtiss was released in July 2019 from Philadelphia’s Class AAA team, the Lehigh Valley IronPigs, with a 10.95 earned run average. He auditioned for 15 teams that September and October, with no offers. He even lost his job with a winter league team in the Dominican Republic.

“They told me right before the season started that I could come to, like, the Dominican minor league,” he said. “My roster spot evaporated. Literally, nobody wanted me. So it was the Rays, and I’m grateful.”

The Rays made Curtiss his only minor league contract offer, endorsed the mechanical refinements he had tried last winter and convinced him he could thrive if he just threw strikes. This season, Curtiss worked 25 innings with a 1.80 E.R.A. — and only three walks. 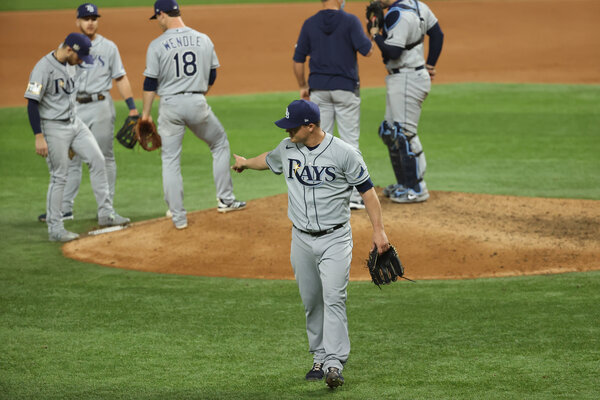 Throwing strikes seems like an obvious strategy, but not all strikes are the same. Command — the ability to locate the ball anywhere a pitcher wants — is considered more important than having the control to throw over the plate. The Rays upend that notion.

Their staff identifies and emphasizes one or two things a pitcher does best. Coaches will help pitchers understand how their pitches behave, and suggest sequences. But most advice is simple.

“Throw the ball over the plate,” Boroski said. “We’re not big on location; we don’t go, ‘Down and away, up and in.’ It’s, ‘Throw strike one, throw strike two and expand the strike zone.’ When you give them that kind of freedom, they understand that they don’t have to be perfect for every pitch.”

Diego Castillo, who earned his third postseason save in the Rays’ 6-4 victory in Game 2, is a product of the Tampa Bay farm system. But most of the relievers have a story like Curtiss’s — given up by other teams and acquired for a bargain price.

Fairbanks, who has had two Tommy John surgeries, had a 9.85 E.R.A. in the majors before the Rays acquired him in July 2019 in a trade with Texas. Ryan Thompson, a right-handed sidearmer, joined the Rays in the minor league Rule 5 draft while recovering from Tommy John surgery in the Houston farm system.

The last three relievers the Dodgers used on Wednesday — Joe Kelly, Alex Wood and Jake McGee — would have earned more than $22 million combined in a full 2020 season. The Rays’ postseason bullpen includes one reliever with a salary above $600,000 — the veteran lefty Aaron Loup, one of five active relievers who started spring training as nonroster players.

Loup retired all three hitters he faced in Game 2, with two called strikeouts — one on a fastball, the other on a curve — before Castillo pumped three strikes in three pitches to fan Chris Taylor to end the game. Nick Anderson and Fairbanks had started the bullpen relay, combining for nine outs before Loup. None of the relievers allowed a walk.

Anderson, who started his professional career in an independent league, intrigued the Rays with his ability to throw fastballs up in the zone. Since they acquired him in a trade from Miami last year, Anderson has struck out 49.3 percent of all opposing hitters, the best ratio among major leaguers with at least 20 innings pitched. He has wobbled a bit in the postseason — his E.R.A. this year is 4.85 — but the Rays have won in seven of his eight appearances.

“It almost feels like when he goes out there, he’s just striking everybody out and then going in the dugout; it’s that easy for him,” said Blake Snell, who started Game 2 but didn’t pitch enough innings to get the win. “Having a guy like him is big for our team, because he comes into any situation, from the fifth inning on, that’s going to be the most crucial point of the game.”

It should not seem odd or radical, Cash said, for a team to use its best relievers whenever a high-leverage moment arises. Whomever he calls, he has a stable of strike-throwers in reserve — and no apologies for finding a new way to win.

“What we’re doing is maximizing our roster and doing everything we can to make the best decisions to put the players in the right position to succeed — and ultimately win as many games as possible,” Cash said. “There’s not much odd about that.”