Real Madrid have the aura, a formidable history and they will be shooting for immortality when they go for a modern-day hat-trick of Champions League wins but, beneath all that, Liverpool have nothing to fear if they do reach the final. 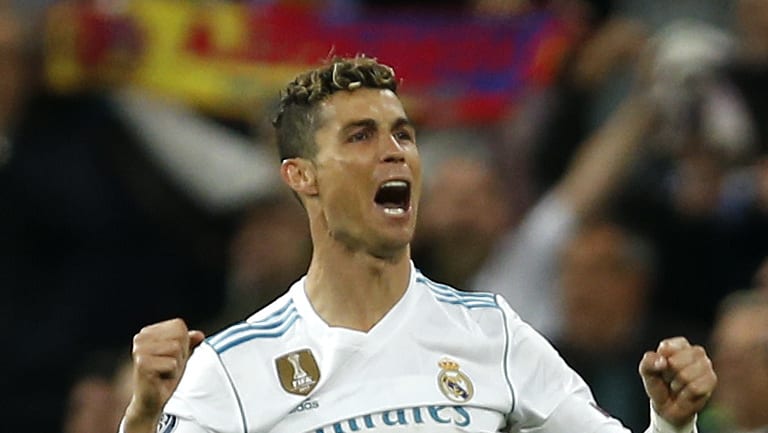 Into the final: Cristiano Ronaldo celebrates at the final whistle.

Yes, Real's recent European record is phenomenal and, yes, Zinedine Zidane is still yet to lose a knockout tie over three seasons in club football's most prestigious competition but they wobbled almost uncontrollably here before somehow getting past Bayern Munich in an epic semi-final. The final whistle felt less like the end of a football match and more the last bell for an ageing boxing champion who, while ahead on points, was out on his feet.

The sort of goalkeeping howler by Sven Ulreich that would make a Sunday league footballer cringe had earlier gifted Karim Benzema one of his two goals but this was otherwise all about Real's experience and, while their streetwise qualities could be admired, it was equally easy to see their vulnerabilities amid a La Liga gap this season to Barcelona of 15 points.

The sense of invincibility that Real Madrid may have accumulated in the Champions League over recent years has rarely stretched this season to their defence and, knowing that at least two goals were needed, Bayern Munich were certainly set up to attack.

Arjen Robben might have been a big miss but Thomas Muller, James Rodriguez and Frank Ribery were all selected behind Robert Lewandowksi in an adventurous 4-2-3-1 formation. It put considerable pressure on Thiago Alcantara and Corentin Tolisso against Real's narrow midfield diamond but did provide Bayern with considerable scope to attack the full-backs.

They immediately pinned Real back and, after Muller's cross was not cleared by Sergio Ramos, Joshua Kimmich pounced to underline his goalscorer's instinct even from the right back position. As well as three assists, it was Kimmich's fourth Champions League goal already this season.

The goal did seem to awaken Real and, for the next nine minutes at least, they did begin to pass the ball with some conviction. A long passage of possession was also soon rewarded when, after a move involving 28 Madrid passes, Marcelo crossed to find Karim Benzema in space on the edge of the six-yard box to head what was his first goal from open play since February. 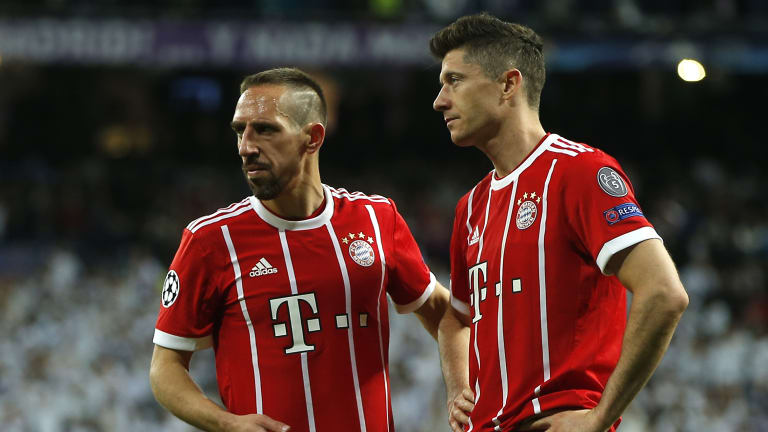 Down and out: Franck Ribery, left, and Robert Lewandowski at full time.

It was a significant setback but the wider task for Bayern had still only changed marginally and they were straight back on the offensive. Three further chances to equalise the tie on aggregate were then spurned shortly before half-time. First Lewandowski had a shot saved by Keylor Navas and then Muller's header was blocked by Marcelo before Rodriguez – who is on loan from Real – somehow steered what was a virtual open-goal over the crossbar from six yards.

Cristiano Ronaldo had been virtually anonymous throughout the first-half, except for one brief moment when he cut inside Alaba and his shot was comfortably saved at his near-post by Sven Ulreich.

There had been plenty throughout the first-half to give Bayern hope but, after spending most of the tie being let down by poor finishing, they then self-destructed quite spectacularly defensively.

A most routine back-pass was rolled towards Ulreich by Tolisso and, somehow forgetting momentarily that he could not use his hands, he reached for the ball. The Bayern goalkeeper then suddenly remembered what he was doing but, amid the panic, lost his footing. Benzema had been following up and gratefully steered the simplest of finishes into the empty net.

Real look primed to put the match beyond Bayern on the counter-attack but, after a brilliant Marcelo cross, Ronaldo just failed to get his body over a simply volley. Bayern regained hope and, after more excellent passing, Rodriguez partially made amends for his earlier miss by guiding the ball beyond Navas. It left Bayern fully 27 minutes to score the one additional away goal they needed to reach the final.

That they would create further chances was inevitable. Tolisso's shot was well saved by Navas and then Ramos did well to prevent another Rodriguez shot. Zidane tried to stretch Bayern further on the counter-attack with the introduction of Gareth Bale and, while he did overrun one good chance, he was largely also required to join the desperate but ultimately extraordinary rearguard action.