Reds hold on against Lions to end Super Rugby slump The Queensland Reds have snapped a four-game losing streak, hanging on after a fast start to beat South Africa's Lions 27-22 in Brisbane.

The hosts ran in four first-half tries before withstanding the Lions' reply on Saturday afternoon at Suncorp Stadium to improve to 4-5 this season. 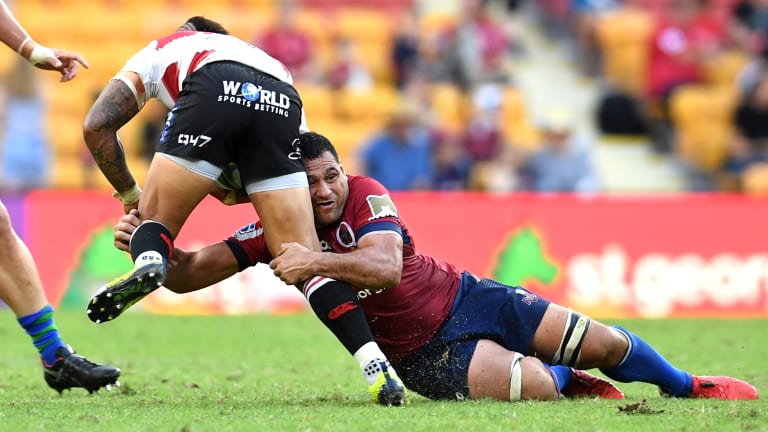 George Smith of the Reds (right) tackles Elton Jantjies of the Lions.

It was a mighty statement against last year's grand finalists, who entered the round on top of the table with a 6-3 record, and came six days after the injury- hit side were outclassed by the Chiefs.

Nine of the Reds' 23-man squad were aged 21 or younger, with the 19-year-old Hamish Stewart handed the reins at five-eighth in his run-on debut.

And the teenager set the tone with a big first-half tackle and some strong carries, even if his hyped kicking game was slightly off.

Hulking prop Taniela Tupou helped Queensland to outmuscle the powerhouse side early as their superior scrum tormented the Lions.

The visitors finally opened their account through Malcolm Marx after 55 minutes and the hooker's second try, six minutes later, made it 27-12 inside the final 20 minutes.

The Lions ran in two tries either side of the fulltime siren but Queensland's resistance meant they came too late to influence the result. 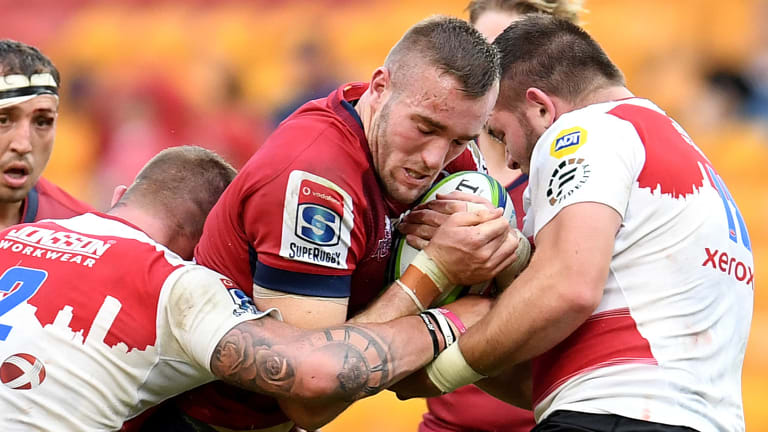 Izack Rodda of the Reds grips the ball tightly as he is tackled.

Brad Thorn's side received a standing ovation from the 12,368 crowd as they went to the break up 24-0.

George Smith's opportunistic try on the buzzer capped a superb half, the 37-year-old picking up a nifty Adam Korczyk scoop after the hosts had pushed over the Lions' scrum. 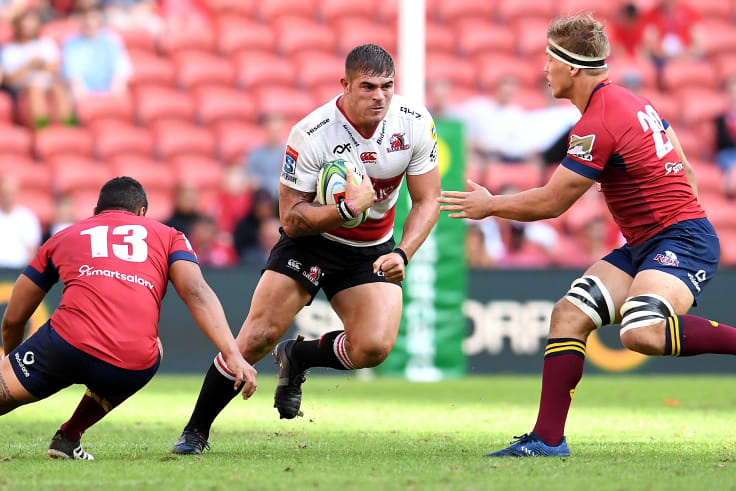 Malcolm Marx of the Lions wrongfoots Chris Feauai-Sautia of the Reds.

JP Smith started with a bang, slamming down the Reds' first try in the second minute after stand-in captain Samu Kerevi's clever kick turned the Lions around.

In-form No.8 Caleb Timu intercepted a Dillon Smit sharp pass to race 45m for the side's second before he limped off with an ankle injury.

And Stewart set up the Reds' third, stepping off his right foot to beat two defenders, before Brandon Paenga-Amosa grabbed the follow up and scurried over.