Canberra Royals mentor Wayne Southwell has been coaching for more than 40 years and the best finisher he's ever seen is his current skipper Ben Johnston.

Johnston had a shoulder reconstruction in the off-season, but the winger returned earlier this month in scintillating touch and determined to lead Royals to consecutive John I Dent titles. 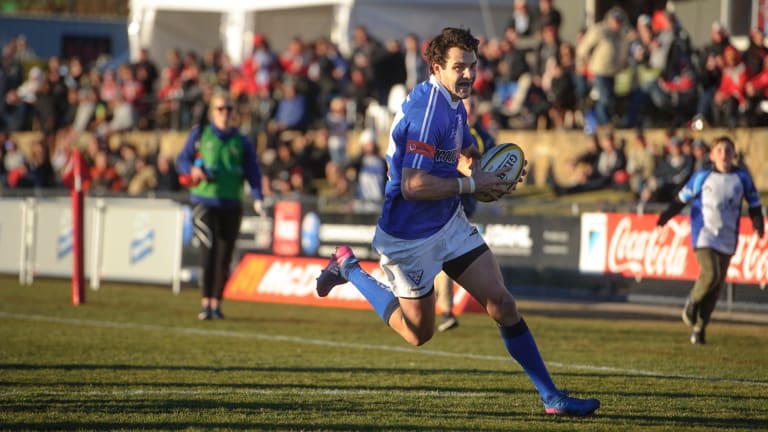 Southwell labelled Johnstone presence invaluable and praised the work ethic of his star speedster after he returned from injury a month early.

The Royals won the premiership unbeaten last year but have been made to work harder for their wins this season and sit second behind Tuggeranong after 12 rounds.

"He sets a great example and is certainly a great finisher on the wing in particular. I'd say the best pure finisher I've seen," Southwell said.

"It's been invaluable having him back, for us to be in the position we are is a credit to the leadership group which he heads.

"As a winger it's tough for him to bark too loud but he really leads by example and has a lot more involvement than other wingers which earns him great respect from the players around him."

Johnston was so keen to get minutes in the legs, he returned to his hometown Byron Bay to play for his junior club Wollongbar when the Royals had the bye a few weeks ago.

"I just said to Southy I wanted to get some consistency back in my shoulder after such a long time out," Johnston said.

"It was the first time in 14 years I've played back home. I played with a couple of boys that I played with at school. It was nice to go home and play in front of most of my family."

The Royals meet fourth-placed Easts this week and a loss see the teams could swap ladder positions. But it would also see Royals hand back the Bob Hitchcock Shield.

Easts forwards coach Jerome Villegas said his men are determined to get their hands back on the shield for the second time this season.

"It's something that can motivate us this weekend because getting it back is important to us."

Easts are trying to snap a two-game losing streak and scrumhalf Jacob Abel admits they've struggling for consistency with two byes over the past month.

"It's a bit of a challenge as it's a disruption to the routine but at the same time, a break is always good in between the hard work," Abel said.

JOHN I DENT CUP ROUND 13