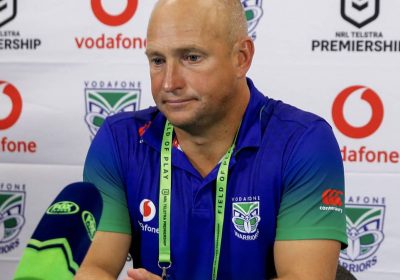 Warriors coach Nathan Brown conceded that a “horrible” offensive display was ultimately damning in the team’s 13-12 loss to the Sea Eagles on Friday night.

The Warriors were strong favourites ahead of the match, as the depleted Sea Eagles had conceded almost 40 points a game in a winless start to the season.

It was meant to be a chance to build on a promising first month, but instead turned into a nightmare, the kind of performance that makes the Warriors one of New Zealand’s most frustrating sports teams to follow.

Manly are a limited side at the moment, but gained confidence across the contest, helped by a lamentable attacking display by the Warriors.

The passing was stilted and inaccurate, handling was poor and the playmakers struggled to find the right options. The Warriors had a ton of ball inside Manly territory but seemed to invent new ways to blow attacking opportunities.

“I thought our effort was first-class defensively,” reflected Brown. “They got two tries from kicks and [we] obviously worked really hard when we didn’t have the ball [but] with the ball we were just horrible. We just didn’t get anywhere near where we needed to get to.”

Aside from Roger Tuivasa-Sheck, the spine were poor. Hooker Wayde Egan worked hard but made some poor decisions while halves Sean O’Sullivan and Kodi Nikorima were mostly ineffective, well below the standard they set against the Raiders.

“That sent Roger on a bit of a wild goose, chasing the ball and just making metres, as opposed to getting in some situations where he can create opportunities.”

“Roger is doing some good stuff for us but we didn’t help Roger get in the right positions because we just got all our attack wrong.”

At 6-6 late in the first half the Warriors turned down a penalty in front of the posts, then coughed up the ball moments later, after a poor pass put the receiver under pressure.

“That probably summed up where we were at,” said Brown. “We were quite confident in the players we had out there to create something and instead we came up with an error on play two.”

Manly were willing and tried hard, but were full of errors themselves (16 across the match) and at times the contest degenerated into a ‘dance of the desperates’, in admittedly difficult conditions

Brown listed nine errors inside Manly territory in the first half alone, when more composure and cohesion could have helped the team build a comfortable advantage.

But the key moment came in the third quarter. Ahead 12-6, the Warriors had four consecutive sets camped in Manly territory.

But aside from forcing two goal-line dropouts, they couldn’t engineer much. There was no structure, no deception, no variation and little momentum, which meant predictable crash balls to the outside were easily dealt with.

A tame grubber ended that spell and Manly rallied from there, looking the more likely team in the final quarter, after a fortuitous try to level the scores.

“We didn’t expect to be perfect on a short week with lots of blokes not playing, but we certainly should have been a lot, lot better than what we were with the ball,” said Brown. “Offensively we were poor so I’ve got to take some responsibility for that.”

The inability to set for a field goal was also telling, with O’Sullivan miscuing his attempt while Nikorima elected to run the ball after being crowded out by the Manly chasers, before Cherry-Evans made no mistake with his last-second attempt.

“He rarely misses, when he gets the opportunity,” said Brown. “But the game probably shouldn’t have got to that stage though.”