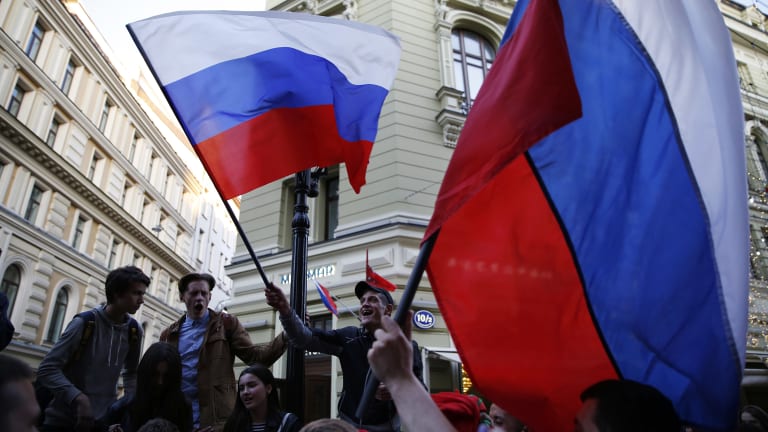 Some Russian fans wave the national flag in Moscow on the eve of the World Cup.

Moscow: At last, for Russia, it is over. The stadiums, as promised, are ready — shimmering space-age bowls dotting the skylines of 11 cities across the country. The 32 teams are here, ensconced in state-of-the-art training facilities.

The fans have arrived, flags draped over their backs, from Kaliningrad to Ekaterinburg. This country has done what it promised to do eight long years ago. It has done what it said it could. It has delivered a World Cup. All that is left, now, is the trifling matter of some soccer matches.

The long wait for the 2018 World Cup was never really about the sport. For Russia — or, rather, for the Russian government (the next month may illuminate that those two are not synonyms) — it has been about flexing the nation's muscles, proving to its people as much as to its rivals that it can deliver the world's most-watched sporting spectacle just as well as any of its detractors and foes could.

For everyone else, much of the focus has been on anything but the sport: the precise mechanics, still shrouded in doubt, as to how Russia won the right to host the tournament in the first place; the dismantling of what détente there had been between Russia and Europe, and between Russia and North America in the course of eight fraught, bloodied years; the spectre of racism and homophobia and hooliganism defacing soccer's great carnival.

There have been times, not long past, when it has felt so improbable — and, in some ways, inappropriate — that the world would descend on Russia for this party that it has been hard to conceive of this World Cup as a sporting event at all, rather than a test of a nation's strength and an international community's resolve.

The fact that, at some point, some soccer would break out amid all the politics has seemed like an afterthought. Certainly it has to Russia: As Stanislav Cherchesov, its national team's manager, said on Wednesday, a little more than 24 hours before his team was to face Saudi Arabia in the opening game, "half the country will only realize there is a World Cup happening" in the hours before kickoff. 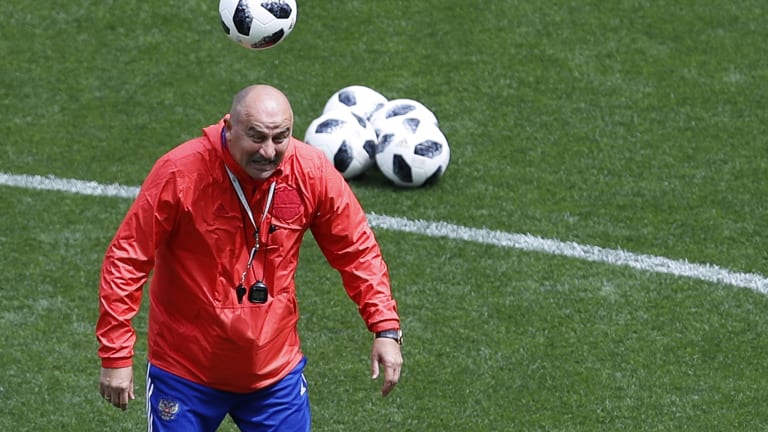 All of the investment, all of the attention, has been spent on making sure the house looks good before the guests arrive. Russia, in a sporting sense, has done little to ensure it actually has a good time.

It was telling, as Cherchesov faced the news media, how many of his interrogators started off by wishing him and his team good luck, how keen they were to offer examples of how the country is behind them, unwavering in their support.

It has not felt like that, at times, as Russia observed possibly its weakest national team as an independent nation; Artem Dzyuba, its towering striker, felt compelled this week to issue an impassioned cri de coeur to try to bring an end to the negativity surrounding the squad.

There has been little attempt by President Vladimir Putin, too, to identify himself with the team; the possibility of not winning the tournament, or even of failing to acquit itself well, is simply too great a risk. Russia's potentate has, instead, focused on the one victory he could guarantee.

"What we know already for sure is that the winners of the tournament already are the organizers," Cherchesov said, parroting the party line. Putin does not need the team to win so much as a game to get his message across. As long as it fails in spectacular surroundings, he has what he wanted, what he promised.

For everyone else, however, it will not be the backdrop that ensures a memorable World Cup. That requires something much less tangible, much harder to impose from above.

All World Cups, to some extent, feel the same. The host cities are sanitized, homogenized by the experience. First the government arrives and casts a pall over whatever problems they may find — stray dogs are disposed of when required, ugly buildings are covered with cloth facades — and then, to complete the job, FIFA appears with its vast apparatus in its wake, transforming unique towns and cities into its embassies. There is a fan zone, a boulevard of sponsors' tents, lurid blue signs offering directions in a childlike font.

That is what the fans see: a Disneyland version of a place. Everyone, of course, has a good time at Disneyland. The fans bring the color and the noise and the vibrancy. And it is authentic, but still somehow detached, displaced, disorientated by the meaninglessness of its backdrop.

It only transcends that when the host nation's population buys into it, as it did in Germany in 2006, or in South Africa in 2010 or, in parts, in a strife-torn Brazil in 2014. That has not yet happened in Russia, as Cherchesov's comments alluded to.

Such is the lot of the party host, of course: The guests come for fun, and you are always wondering how much clearing up there will be afterward.

But Russia is too vast and too unwieldy to be expected to react as one, even to an event as vast, and unwieldy, as the modern World Cup. There was a poetic moment during Cherchesov's news conference, when a Danish journalist asked him if he had a message for the Russian people. "You are Danish," he said, smiling. "From Denmark? You're Danish, from Denmark. How could you be expected to know the labyrinths of the Russian soul?"

How Russia — not its government; not Putin; not the Kremlin — will respond to this World Cup is the one question that can only be answered over the next month. It will not celebrate because it has a batch of glimmering new arenas that it scarcely needs, or because the World Cup has been bent to Putin's will.

It will celebrate, perhaps, because the mood of a World Cup can be infectious. A country used to playing with identity, as author Peter Pomerantsev has noted, may delight in assuming the visage of a modern, international nation for a month; perhaps that identity has been there all along, awaiting its chance.

It may even celebrate because its team does better than expected, although hope for that is thin on the ground. "All we want is to make the people proud," Aleksandr Samedov, the midfielder, said. A strong performance from Russia would, if past experience is anything to go by, help the tournament's atmosphere.

It is not easy to predict — all countries defy easy definition, and Russia more than most — but it is crucial. Russia, the Russia of power and Putin, has done what it said it would: It has delivered a World Cup. It is the people of Russia, their role so little discussed in those eight long years, as much as the stars of Brazil and Spain and Germany, that can make it a memorable one.