Home » Sport » Ryan Fitzpatrick led a raucous ovation for his backup, rookie QB Tua Tagovailoa, as he made his NFL debut 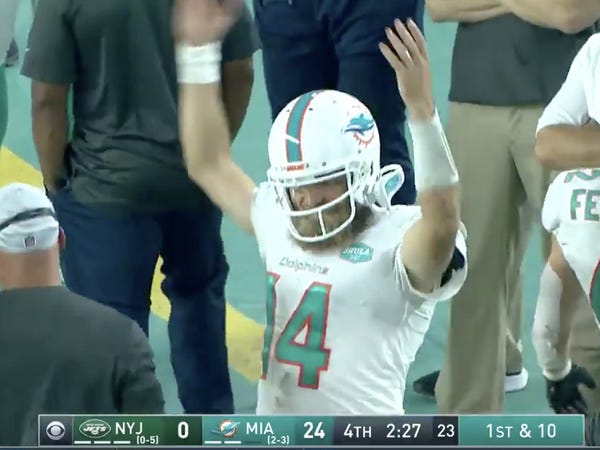 Miami Dolphins rookie quarterback Tua Tagovailoa got his first NFL action on Sunday in the final minutes of a blowout win over the New York Jets, and nobody was more excited about it than starting quarterback Ryan Fitzpatrick.

With the Dolphins holding a 24-0 lead late in the fourth quarter, Fitzpatrick stayed on the bench for his team's final drive, with Tagovailoa entering to put the game away.

Before Tagovailoa took his first snap, Fitzpatrick could be seen on the sidelines hyping up the crowd to celebrate the start of what Dolphins fans hope will be a brilliant career from their new rookie quarterback.

Tagovailoa didn't have to do much for the Dolphins to seal the win — he handed the ball off three times and completed both of his two passes — but the moment was a big one for both the player and franchise.

After the game, Tagovailoa returned to the field alone to FaceTime his parents and take in the memory of his first NFL action.

While the sight of a starting quarterback eagerly cheering on the man who will eventually replace him might not be common in the NFL, the relationship between Fitzpatrick and Tagovailoa is different, and clearly, quite endearing.

"Fitz is just a wholesome person," Tagovailoa told ESPN's Cameron Wolfe ahead of their game on Sunday. "The way he is out on the field is the same way he is off the field. I don't think there's really a distinct change in who he is. I mean, what you see out there is really who Fitz is. He's a coach. He's a mentor on and off the field. But he's also a very, very family-oriented person. Very loving. Very caring for guys. And he's funny, too. He's really funny."

Fitzpatrick, a journeyman quarterback who has shown flashes of brilliance at nearly every stop he's made throughout his career, has served as a mentor to Tagovailoa through his first season, and it's clear that regardless of what the future holds for both quarterbacks, they'll be cheering each other on.