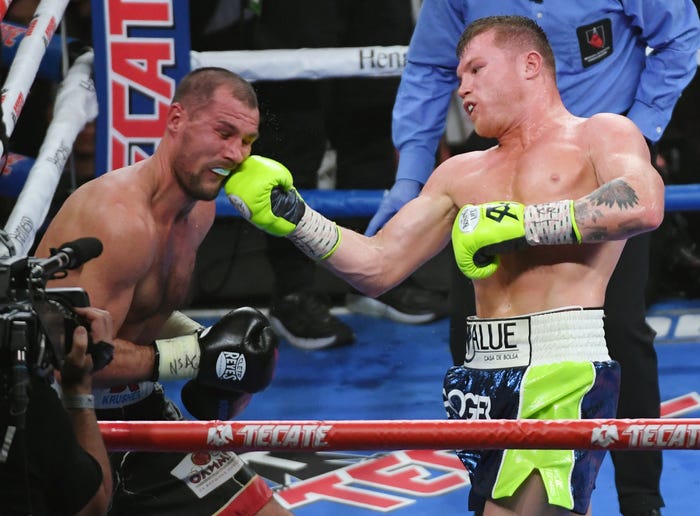 ESPN reported Wednesday that Alvarez will return to the ring in December against the British fighter Callum Smith, the WBA super middleweight world champion.

Insider ranks Alvarez as the world's No.1 boxer. Despite that status, he's been sidelined all year because of the coronavirus pandemic and a behind-the-scenes legal dispute between himself and his former promoter Golden Boy and then-broadcaster DAZN.

The English start-up, which is an OTT subscription service that owns rights to various soccer leagues, got involved in combat sports in 2018 and has aired Alvarez's three most recent fights.

The Mexican filed a legal complaint against Golden Boy and DAZN in September after a failure to agree terms to his next bout.

Alvarez was suing Golden Boy and DAZN for an alleged failure to deliver on guaranteed payments — an apparent breach of a $365 million deal struck in 2018, The Guardian reported.

There was also disagreement on who was considered to be suitable opponents.

According to Dan Rafael, who is one of boxing's pre-eminent reporters, DAZN only considered Oscar de la Hoya, Khabib Nurmagomedov, and Jorge Masvidal as "premium" opposition.

De la Hoya is Alvarez's promoter, 47 years old, and has not fought for 12 years. The other two athletes are MMA fighters in the UFC, and have never fought as pro boxers before.

Last year, The Athletic stated that if Alvarez were to gain control of his career, then he must be prepared to walk away from Golden Boy. This year, that animosity seemingly extended to DAZN.

Insider has frequently reported that should he walk, he'd be boxing's greatest free agent since Floyd Mayweather paid $750,000 to buy himself out of his Top Rank contract in 2006, going on to earn hundreds of millions of dollars many times over.

Last week, Alvarez, Golden Boy, and DAZN all parted ways. The 30-year-old is free to make a long-term deal with a new broadcast network, or work on a fight-by-fight basis with whoever he wants, whenever he wants.

Alvarez is not short of admirers.

Showtime Sports President Stephen Espinoza told Insider in September that he'd like "nothing more" than to work with him again, having previously aired the fighter's bouts against Mayweather and Austin Trout.

Last year, the Matchroom Sport group managing director Eddie Hearn told us he would work with Alvarez "in an absolute heartbeat."

If ESPN's report is to be believed, it is Hearn who is the first to work with Alvarez as a free agent, and, in a bizarre twist of fate, the British boxing promoter could even bring him back to DAZN for his bout next month.

"Alvarez will meet Callum Smith to unify WBA super middleweight titles in Texas in December," ESPN journalist Salvador Rodriguez said, adding that sources of his say the targeted dates are the 18th, 19th, and 20th of that month.

"His first business partner will be Eddie Hearn of Matchroom Boxing. It is very possible that DAZN, the broadcast partner Alvarez was working with before severing ties with longtime promoter Golden Boy, could carry the fight in the US," the report added.

The Alvarez and Smith fight, which will be one of the biggest boxing matches of the year, could take place at the AT&T Stadium in Arlington, or the Alamodome in San Antonio, according to ESPN.

The sports website added that a lightweight match between Gen-Z superstar Ryan Garcia and the British athlete Luke Campbell could take place on the undercard.

After Smith, Alvarez could sign a contract with the PBC

Before news broke midweek about a short-notice Alvarez and Smith fight at the end of the year, there was speculation of a one-fight deal against the Premier Boxing Champions super middleweight Caleb Plant.

Though that fight has not been made, it could be struck in the near future as Rafael reported on Boxing Scene that Alvarez has had discussions with PBC chief Al Haymon, one of boxing's most powerful figures, about a three-fight deal.

Haymon has television deals with Fox and Showtime, and so a link-up with PBC could see Alvarez return to Espinoza.

PBC has a hulking roster of boxers, including many significant players in the weight classes Alvarez competes in, and so he could take on Jermall Charlo, David Benavidez, and, of course, Plant in the coming years.

A four-division world boxing champion, Alvarez has a pro record of 53 wins (36 knockouts) against one loss and two draws.