Six ACT Brumbies stars have been named in an Australian Wallaroos squad to take on the world's best but this Canberra schoolgirl has her eye on a different shade of green and gold.

Brooke Gilroy has tasted success in the world's biggest girls sevens tournament in Hong Kong and now a brush with fame has inspired her to chase her dream of representing Australia in the world sevens series. 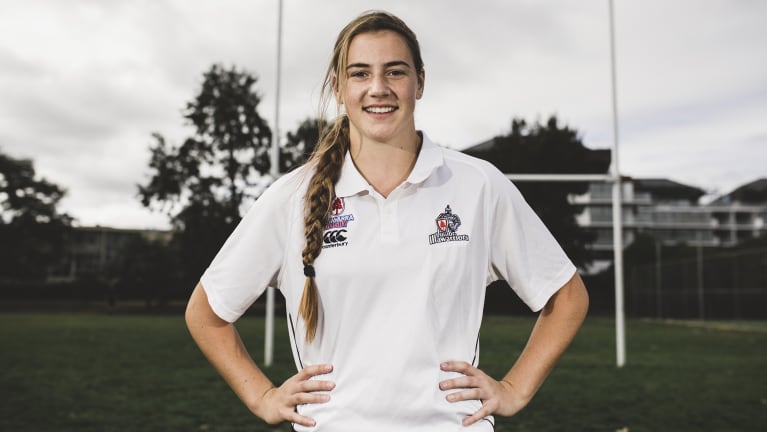 Brooke Gilroy wants to take her sevens career as far as possible.

The 16-year-old ACT schoolgirls representative has only played rugby for one year and will ply her trade with Daramalan College in an ACT rugby 10s competition beginning in May, having also played sevens for Royals.

A stint representing Illawarra in Hong Kong followed by the chance to see Australia play at the Commonwealth Games has left her itching for a career on the world stage.

She knows she has a long road ahead of her, but Gilroy wants to lead Australia to gold.

"It was very inspiring to watch because I want to do that one day," Gilroy said.

"I’ve always sat on the sidelines watching footy, and I always told my parents ‘can I play?’ They kept saying ‘no, you’re not big enough yet, you’re too young’.

"When Daramalan finally put a team together I was like ‘okay, I’m definitely playing’, and mum and dad were like ‘alright’ because I was in year 10 then.

"Because it was a school thing they let me, and I’ve loved it ever since the first game started. Mum found the Brumbies camp and I wanted to go there to gain more experience and try and see how far I can make it.

"I’ve loved it ever since I started."

Six Brumbies Super W stars have been picked in an extended Wallaroos squad with an eye on a two-match series against New Zealand in August and the 2021 Women's Rugby World Cup.

The rising rugby star would love to follow suit with an eye on a second straight ACT schoolgirls call-up but first she is going "to try and make it in sevens as far as I can go".

Gilroy recently returned home from a successful tour of Hong Kong, where she played with the Illawarra under 19s in the world’s biggest girls rugby sevens tournament.

Gilroy's team swept all before them to finish undefeated, making the long road trips to and from training in Dapto every Friday and all the burns from the synthetic grass worth it.

"I was in the Brumbies team for the 15s under 18s, and I was an emergency for the under 17s sevens team," Gilroy said.

"One of the Brumbies coaches, Damien Tyson, put my name forward because Illawarra was trying to find more people to play.

"Damien Tyson emailed my mum wondering if I could go. I was very interested to go and I just jumped at the opportunity because it would be such a good experience."