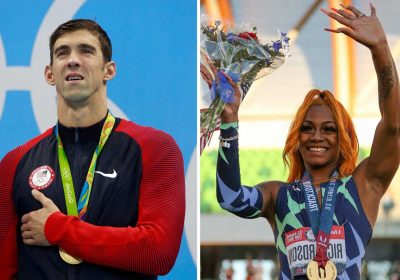 After losing her spot in her Olympic event, sprinter Sha’Carri Richardson is being compared to another American record holder: Michael Phelps.

The 21-year-old likely will not be able to compete at the Olympics after testing positive for marijuana. This comes just one week after running the 100-meter dash in 10.86 seconds at the U.S. Olympic trials.

Her positive result invalidates her trial results for the 100-meter event. Richardson, who is considered the fastest woman in the United States, has accepted a month-long ban from the sport. This puts her in the position wherein she can compete in the 4×100 meter relay, which would take place after her suspension lifts on July 28.

In an interview with NBC on Friday, Richardson said she used cannabis to cope with the death of her biological mother, which occurred one week before the trials took place. The sprinter said that she had learned the news from a reporter and it sent her to a “state of emotional panic.”

Many are comparing this to Phelps — the most decorated Olympian of all time with 23 medals — who was caught smoking marijuana in 2009. As a result, USA Swimming stripped Phelps of its financial support. He was banned from competing for three months and he lost a major Kellogg sponsorship deal.

Some pointed out the similarities between Phelps and Richardson, questioning why the former was allowed to compete in the Olympics. However, the situations differ due to the timing.

Phelps’ suspension took place six months after the Beijing Olympics and five months before the 2009 World Championships; Richardson’s suspension is mere weeks before the games are slated to begin.

Moreover, Phelps never actually tested positive for THC. He was only caught smoking from a bong on camera months after the Olympics occurred, which didn’t disqualify any of his scores.

Cannabis is prohibited by the International Olympic Committee’s World Anti-Doping Agency “unless an athlete has an approved Therapeutic Use Exemption.” If an athlete tests positive for THC, they can receive “anti-doping rule violation and sanction,” as the organization considers it a performance-enhancing substance, a health risk, and goes against the “spirit of the sport.”

Suspensions can range anywhere from 30 days to two years.