Home » Sport » Simmons' Sixers advance, await Bucks or Celtics in next round

Simmons' Sixers advance, await Bucks or Celtics in next round The Philadelphia 76ers punched their tickets to the conference semis with a 104-91 win over the Miami Heat in Game 5 of their conference quarterfinals on Friday at Wells Fargo Center.

They await the winner of the Boston-Milwaukee series, which the Celtics lead 3-2. Game 6 will be Thursday night in Milwaukee. The conference semifinal round of the playoffs is scheduled to begin next Monday or Tuesday. 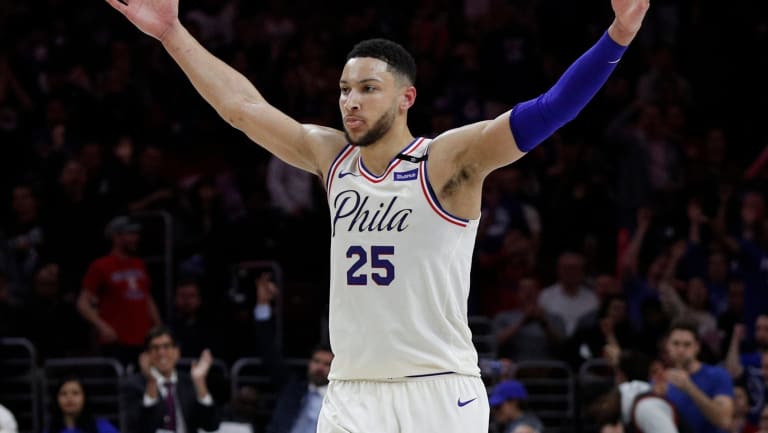 Job done: Ben Simmons and the 76ers are through to the conference semis.

JJ Redick finished with a game-high 27 points with 5 of 10 shooting on 3-pointers. Joel Embiid had 19 points, a game-high 12 rebounds, two steals and one block in his first playoff game in front of his home crowd. The All-Star center had missed 10 straight games with a fractured orbital bone near his left eye before returning Thursday night for Game 3 in Miami.

The atmosphere inside the arena was hyped hours before the game started. That's when word circulated that rapper Meek Mill was going to be released from prison and ring the ceremonial bell before the game.

Mill was among a handful of celebrities in attendance to support the Sixers. Some of the other were Eagles owner Jeffrey Lurie, boxing great Bernard Hopkins, actor Kevin Hart, rapper Lil Dicky, Eagles running back Corey Clement, and Pennsylvania Gov. Tom Wolf.

They were among the 21,171 who enjoyed the moment as the Sixers capped the series, four games to one. They also witnessed the Heat's rough play.

The Sixers had a commanding 18-point lead on Embiid's finger-roll layup with 1 minute, 34seconds left in the third quarter.

James Johnson received a technical foul for fouling and shoving Marco Belinelli out of bounds with 5:24 left. Redick made the technical foul before Belinelli made two foul shots to give the Sixers a 90-79 advantage.

Then after Johnson scored on the ensuing possession, Tyler Johnson picked up his sixth foul while hacking Belinelli. The reserve guard split his free throws to make it a 91-81 game with 4:53 remaining.

It didn't take long after the opening tip for the Heat to display their trademark physicality.

Simmons drove in the lane 1 minute, 31 seconds into the game for a layup attempt. He appeared to turn the corner on Johnson. But that's when Josh Richardson did his best free-safety impersonation. Richardson went low at the Sixers point guard, taking out his legs. Simmons flipped in the air and landed on his back. The rookie popped up and walked to the other end of the court and back. Then he went to the foul line and made a pair of free throws to give the Sixers an 8-3 lead.

Then with 1:03 left in the quarter, Kelly Olynyk hit Embiid, who is wearing a protective mask due to a fractured orbital bone, in the face. The center, who was trying to grab a defensive rebound on the play, was knocked to the floor. He made one of two free throws to knot the score at 21. Fourteen seconds later, Heat reserve guard Wayne Ellington ran over Redick for an offensive foul.

But Dragic's 17-foot step-back jumper tied the score for the 11th time as the teams went into the locker room tied at 46.