Adams, who joined Saints from Birmingham City for £15m last July, lobbed goalkeeper Ederson with a first-time strike from 40 yards out after Oleksandr Zinchenko had surrendered possession in midfield.

Manchester City manager Pep Guardiola made six changes to the side which thrashed champions Liverpool 4-0 at Etihad Stadium on Thursday, with key playmaker Kevin de Bruyne among those initially rested.

The goal drew an intense reaction from City, as Fernandinho hit the post and the in-form Alex McCarthy kept out David Silva’s header in the aftermath.

The visitors rarely let up thereafter but were repeatedly left frustrated by Saints goalkeeper McCarthy, whose one-handed save from Gabriel Jesus in the second half was the pick of several superb stops.

Southampton had chances of their own amid the increasing City pressure but neither Nathan Redmond nor Danny Ings could convert rare opportunities, while Ederson was alert to Stuart Armstrong’s swerving shot.

There was to be no repeat of City’s comeback to win the reverse fixture 2-1 in November and defeat leaves Guardiola’s side 23 points behind Liverpool, who beat Aston Villa 2-0 earlier on Sunday.

Southampton welcomed Manchester City to St Mary’s with 40 points already secured – a tally which saw them a reassuring 13 points clear of the relegation places prior to kick-off.

That return, with six games remaining, had already bettered their total haul in each of the past two seasons and allowed Ralph Hasenhuttl’s side to approach Sunday’s fixture without fear.

Although City settled into the mesmerising passing that has hypnotised many other opponents, Southampton once again demonstrated the desire and determination which has seen them admirably recover from their humiliating 9-0 defeat by Leicester in October.

Adams, 23, has had to wait for his opportunities in his first season at Southampton but his first goal in 456 days was one to savour as Stuart Armstrong robbed Zinchenko and the striker punished the wandering Ederson emphatically.

The hosts could have led after just six minutes but Nathan Redmond was unable to convert after Adams had gathered an uncharacteristic miskick by Aymeric Laporte.

Ings went close from Kyle Walker-Peters’ excellent cross, but it was in defence where Southampton supplied the heroics as the returning Jack Stephens led by example with brave blocks and vital clearances in front of the unbeatable McCarthy.

Epitomising the commitment to the cause despite there being little to play for, striker Ings – unable to add to his tally in the race for the Golden Boot – was among those throwing their body in the way as Saints held on for a rare home victory. They have now taken 17 points from 17 home games this season.

Hasenhuttl’s side were staring at a relegation fight halfway through this campaign, but in 13th with five matches to go they have officially secured their Premier League status for another season.

Manchester City’s immediate response to officially being dethroned as Premier League champions was to dismantle Liverpool at Etihad Stadium.

Raheem Sterling ominously claimed “next season starts now” after that result but, as Sunday’s team news suggested, City’s priorities now lie with the FA Cup and Champions League in a season in which they have already dropped more league points than in the previous two combined (33).

A return to the consistency which had delivered back-to-back league titles is the task for Guardiola, given the sheer brilliance his team can produce on any given day – yet Sunday’s defeat demonstrated that may take some work.

Zinchenko’s error was typical of the momentary lapses in concentration that have cost City so dearly this campaign, though the visitors had ample opportunities to turn the game in their favour as they fired 26 shots at goal.

Jesus, with six of those attempts, was once again unable to provide the clinical touch in Sergio Aguero’s absence, while De Bruyne and Phil Foden were unable to unlock a dogged Southampton defence following their second-half introductions.

The desire to recover a result was certainly evident in City’s performance with Riyad Mahrez and Raheem Sterling both also going close, but with second place all but secure an FA Cup semi-final meeting with Arsenal on 18 July is where attentions surely now lie. 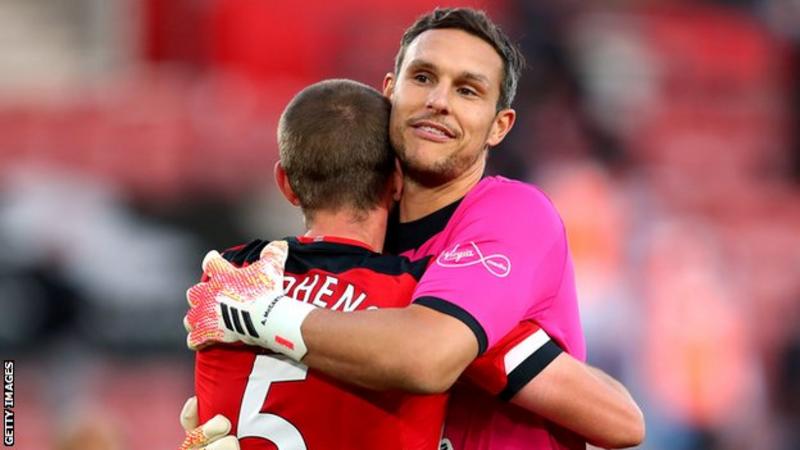 David Silva (Manchester City) wins a free kick in the attacking half.

Attempt missed. Bernardo Silva (Manchester City) left footed shot from the left side of the box is close, but misses to the left. Assisted by Kevin De Bruyne.

Attempt blocked. Bernardo Silva (Manchester City) left footed shot from the left side of the box is blocked.

Kyle Walker-Peters (Southampton) wins a free kick in the defensive half.

Attempt missed. Aymeric Laporte (Manchester City) left footed shot from outside the box is too high.

Attempt saved. Stuart Armstrong (Southampton) right footed shot from outside the box is saved in the top right corner. Assisted by Nathan Redmond.

Attempt saved. Stuart Armstrong (Southampton) right footed shot from outside the box is saved in the centre of the goal. Assisted by Danny Ings.

Attempt missed. Kevin De Bruyne (Manchester City) right footed shot from the centre of the box is too high. Assisted by David Silva.

Kyle Walker-Peters (Southampton) wins a free kick in the defensive half.

Attempt saved. Gabriel Jesus (Manchester City) header from the centre of the box is saved in the bottom right corner. Assisted by Oleksandr Zinchenko with a cross.

Fernandinho (Manchester City) is shown the yellow card for a bad foul.

Nathan Redmond (Southampton) wins a free kick in the defensive half.