This looked like a good time to get Sydney. Lance Franklin was out, so too Sam Reid and Dan Hannebery. Their captain was down on form, and their midfield had been out of touch. But if season 2018 has taught us anything it's beware the wounded beast. 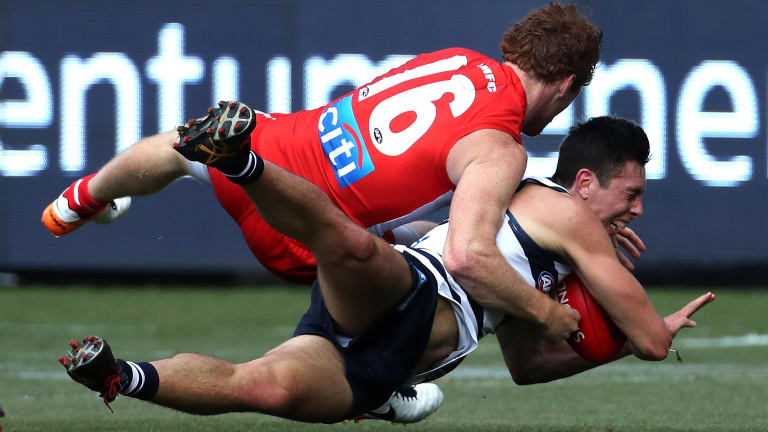 Few across GMHBA Stadium had expected the strains of "cheer cheer the red and the white" to be blaring come late Saturday afternoon, particularly at three-quarter time with the home side boasting a lead of more than 20 points.

This was a match which the Cats appeared to have signed, sealed and delivered until the Swans launched a blistering final quarter in which they slammed seven goals to one to finish all over the home side.

Well beaten in the middle two quarters, the Swans were plus 57 for possessions in the last term as the Cats played like a team that thought they had the four points iced.

Captain Kennedy rebounded from two shockers with a best-on-ground 33 possession performance, willing his team over the line with 13 touches in the last term.

The question coming into the game was how the Swans, sans Franklin and Reid, would kick a winning score. Up bobbed Will Hayward for three while Robbie Fox, debutant Ben Ronke and Ollie Florent – all part of Generation Next for the Swans – kicked two each.

For Geelong this was one that slipped away. For two quarters, they were clearly the better team. The usual suspects Mitch Duncan, Joel Selwood, Patrick Dangerfield and Tom Hawkins were all key players.

Impressive youngster Tim Kelly chimed in at times and Tom Stewart was part of a defence which blanketed the Swans forwards.

But when the game was on the line there was no one in blue and white prepared to fight the fight in the manner Kennedy was.

The Swans had a point to prove and wanted to prove it early. Everything they did had purpose. When pushing forward, they created space with short, sharp leads, which were generally honoured. When the ball spilt free, blue and white hoops were beset by red and white.

The Swans found goals from marks on the lead, forward pressure, a quick entry plus a slice of fortune. The Cats needed the brilliance of Patrick Dangerfield.

To say there was a marked lift from Geelong in the second term would be an understatement. Where they were rushed before, they now found time, due in no small part to their dominance of the contested ball.

Even numbers in their forward 50 helped as well. Dane Rampe, who had taken several key marks as the spare, now had an opponent, Esava Ratugolea, to watch.

As a result, Tom Hawkins – without having an extra defender hanging off him – became the most dangerous forward on the park.

It took 16 minutes for the Cats to kick their first of the quarter but with the ball living predominantly in their forward half one soon became, two, three and four.

The signs were worrying for the Swans, who were struggling to move the ball with any of the fluency they had at the start of the half. Their only score for the quarter came late when Parker missed from just outside the goal square.

While Chris Scott's men were able to find the overlap in the third quarter and move the ball with speed to give Tom Hawkins space inside 50, the Swans' play was stilted and the Cats strengthened their grip on the game. The effort was there from the visitors but their system was crumbling.

As a result, they were resorting to long balls. With no Franklin or Sam Reid, they may as well have been Hail Marys.

Bereft of ideas, the Swans' only goal of the second and third terms came through an accidental back heel by Isaac Heeney, which broke a run of six unanswered majors.

The Cats' lead stretched as far as 22 points but despite being in control of the match they, like many over the last 15 years, found the Swans a difficult adversary to finish off.