Home » Sport » Team effort: How the Jets went from last to grand finalists in a year

Team effort: How the Jets went from last to grand finalists in a year On this day last year, Newcastle Jets players had no idea who their coach would be. The club had just fired Mark Jones – their fourth coach in as many years – after picking up the A-League wooden spoon and being reduced to spectators during the finals series for the ninth season in a row.

When Jets chief executive Lawrie McKinna wasn't responding to job applications from prospective coaches, he was personally calling members who had threatened to cancel their season tickets in protest at the club's plight. 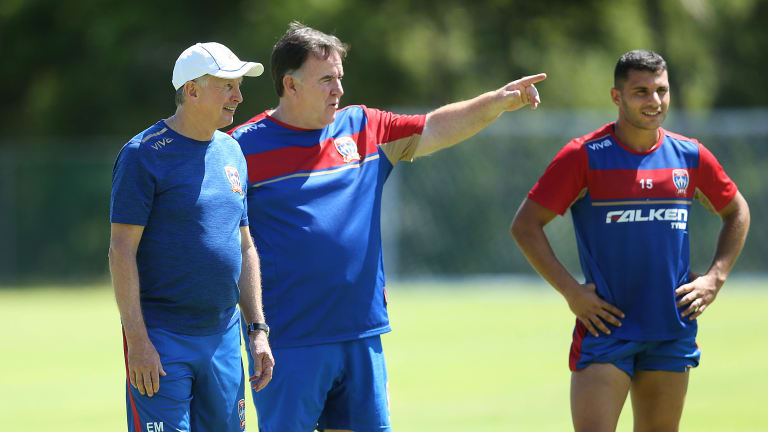 "I phoned everyone one of them up and told them what happened, what the view of the club was, and we only lost one member," McKinna said.

His was a spiel of optimism. He didn't want to reveal much about the coaching situation, but his bright hopes for Newcastle's future hinged on the Jets making major strides towards finally becoming the inclusive club of the region it was pitched to be under previous ownership. Before appointing a new coach, the Jets had already embarked on bringing the club under one roof.

"The biggest thing for the club overall was when we moved next to the training ground," McKinna said. "It might sound stupid, but it made us a club. Before it wasn't a club. Before it was like two clubs. You had an administration office and then football, which never crossed paths."

The first tangible benefit of a seemingly small change was the way the club presented itself to  new players. The united approach helped them attract more leaders, big-game players and what McKinna describes as "winners". Despite not yet having a coach, they were able to sign the likes of Irish striker Roy O'Donovan, attacking midfielder Dimi Petratos and the 2017 Joe Marston Medal winner Daniel Georgievski.

"We don't bullshit, we tell it like it is, and we just told them where we want to go as a club," McKinna said.

The second major benefit of the move happened during the all-in club meeting in pre-season. Newly appointed coach Ernie Merrick was joined by all players, backroom coaches, administration staff and W-League players. The objective was to have the club defined by all of those under its roof.

"He was what the club needed – a steady influence, a calmness – and that's what Ernie brought to the dressing room."

"In July, we met at Cypress Lakes [resort] and everyone set out goals and a vision for a club," McKinna said. "Everybody was giving feedback into this. The boys set goals to finish in the top three, they wanted one Socceroo … we wanted everyone to get on the bus and come on our journey. We agreed to being the best professional sporting team in Australia on and off the park. It meant we had to be competitive and we had to be community-minded. It made the boys realise that if we all worked together, we could achieve a lot together."

When McKinna was a coach, his best tactic was a strong dressing room. His approach to administration is the same, and that's why boosting morale was the first step to turning the club around. Second to that was the appointment of Merrick. After their last three coaches were hired as rookies, the Jets needed someone with experience.

Togetherness brought optimism, and experience brought wisdom, but it was the financial stability provided by new owner Martin Lee that bought quality foreign strikers not seen in the Hunter for some time. Alongside the likes of Petratos, O'Donovan, Georgievski and Nikolai Topor-Stanley came Venezuelan international Ronny Vargas as a marquee signing. When Vargas suffered a horrific broken leg in round three, Lee shelled out for former Santos and Independiente star Patricio Rodriguez. Later, the Jets would bring boom Australian teenager Riley McGree to Newcastle from on loan from FC Brugge.

The results were immediate. On the first day of the season, the new-look Jets thrashed Central Coast Mariners 5-1 in Gosford, with O'Donovan scoring a hat trick against his former club. They went on to 14 more wins in the regular season, the last of which was another  thrashing of the Mariners, an 8-2 rout in Gosford that passed the wooden spoon on to their F3 Derby rivals.

Along the way they scored a club-record 57 goals and scored in every match until the 3-0 loss to Melbourne City in round 25.

In their first finals match in a decade, the former wooden spooners came from behind to beat City – Australia's richest sporting club – in spectacular fashion. It wasn't just one of the A-League's greatest ever goals, scored by McGree, that made the occasion so special but that it happened in front of their biggest crowd in five years. More than 19,000 watched as the Jets sealed their passage to the 2018 A-League grand final on Friday night, just 12 months after the club was seemingly stuck in the doldrums. And it would have been more but for a torrential downpour that hit the city two hours before kick-off. 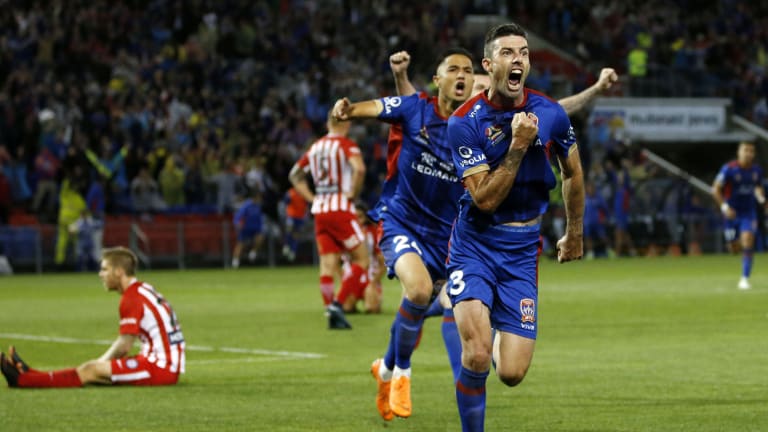 According to the man who guided them there, the changes stem much deeper than those in the dressing room.

"It’s been a real team effort off the park," Merrick said. "Lawrie McKinna has got to be one of the best CEOs in the league, so we’ve got a good synergy, and [former Newcastle grand final winner] Joel Griffiths, who’s helped us sign players and do other jobs around the place. It’s easy to say the coach of the team has done a good job, but really everyone should share that, especially the players."