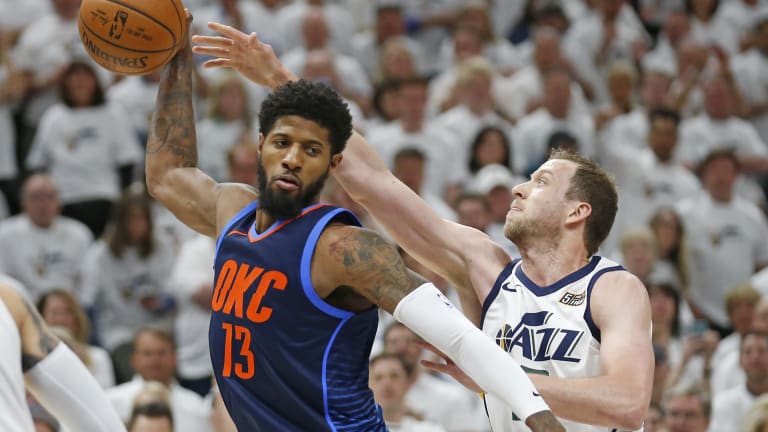 Joe Ingles’ latest three-point barrage has powered the Utah Jazz to a feisty, tension-filled 113-96 victory that places them just one win away from eliminating the Oklahoma City Thunder from the NBA play-offs.

The Jazz took a commanding 3-1 lead in the first-round series in Salt Lake City as the Thunder imploded for the third successive game.

Ingles hit five three-pointers in his 20 points and continued his heated court battle with five-time All-Star Paul George, with tensions again boiling over with shoves and trash-talking. It was the second consecutive game Ingles buried five three-pointers.

George received a technical foul when he pushed Ingles in the first quarter when he took exception to the Australian guarding him too closely. Ingles was later called for a technical when he attempted to grab the ball off George.

The teams had to be separated midway through the fourth quarter when Jazz centre Rudy Gobert claimed he was struck in the genitals by Thunder guard Raymond Felton. Ingles and Russell Westbrook also exchanged words as the Jazz ran away with the win in the final quarter. Jazz forward Jae Crowder was ejected in the final minutes when he lifted his left forearm and struck the Thunder’s Kiwi centre Steven Adams in the face when the teams jostled again and had to be separated.

Ingles missed his first four three-pointers, but in a game-defining 90-second period late in the second quarter he hit three consecutive long bombs to give the Jazz a 58-52 half-time lead.The Jazz’s rookie star Donovan Mitchell top-scored for the Jazz with 33 points. George had 32 points and Westbrook 23 points.

The NBA’s top seed, the Houston Rockets, are just one more win from eliminating the Minnesota Timberwolves. The Rockets blasted the Timberwolves 119-100 in Minneapolis to take a 3-1 lead in their first-round play-off series.

The Los Angeles Lakers achieved the one-quarter highest-scoring team record in 1962 with 51 points in the fourth quarter of a play-off loss to the Detroit Pistons.

Next it will be a crucial day for Australian NBA players Ben Simmons, Patty Mills, Matthew Dellavedova, Thon Maker and Aron Baynes. Simmons’ Philadelphia 76ers can eliminate the Miami Heat and move on to the second round with a win at home while Mills’ San Antonio Spurs will have their season extinguished if they lose to the Golden State Warriors in Oakland. The series between the Milwaukee Bucks, featuring Matthew Dellavedova and Thon Maker, and Baynes’ Boston Celtics hangs in the balance 2-2 with game five in Boston.