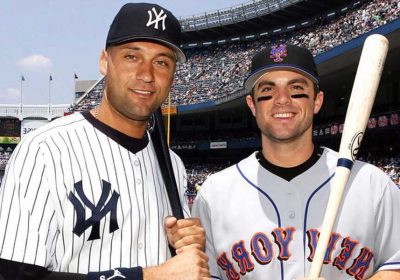 Shohei Ohtani enters Bronx in class of his own: ‘How is he doing this?'

Yankees desperately need to shake up their roster

Why reeling Yankees are now staring at 'important game'

We are ready for your best 26.

We are the all-time Subway Series team, a group of performers who are not necessarily the best players to have donned Yankees and Mets uniforms since 1997, but rather — as this successful scheduling innovation launches its 25th iteration Friday night at Yankee Stadium — those who have shined, have played their finest ball, under the Subway spotlight of 128 regular-season games and five more in the postseason.

And this club, battle-tested, will go up against any other 26 players from the last quarter-century you can muster, and we’ll take our chances.

Starter: Mike Piazza. A .951 regular-season OPS against the Yankees with eight homers — half of those, you might recall, against Roger Clemens.

Backup: Joe Girardi. An .892 OPS and if there’s a bench-clearing brawl that results in mass ejections, he can step in as player-manager.

Starting 1B: Mark Teixeira. A .963 OPS, and his final-play hustle in 2009 ensured the immortality of Luis Castiilo’s dropped pop fly.

Starting 2B: Jeff McNeil. A .909 OPS, better than the .848 his (sort of) current teammate Robinson Cano put up from the other side.

Starting SS: Derek Jeter. Well, he won Most Valuable Player honors in the one Yankees-Mets World Series, in 2000. Kind of a no-brainer.

Starting 3B: David Wright. The best moment of his stellar .878 OPS? His 2006 walk-off single off Mariano Rivera at Shea Stadium.

Backup 1: Matt Franco. Speaking of walk-offs against Rivera, his 1999 two-run, two-out, ninth-inning single gave the Mets arguably their best win in this rivalry.

Starting LF: Hideki Matsui. An astounding .976 OPS over seven years of action. You know how much the 2009 World Series MVP enjoyed the big moments.

Starting CF: Curtis Granderson. He had an .832 OPS as a Yankee against the Mets and then .955 as a Met against the Yankees. No one has excelled more on both sides.

Starting RF: Aaron Judge. With a 1.070 OPS and four homers in Subway action, he has done his part to try to keep this series lively.

Backup 1: Brandon Nimmo. As has this Wyomingite turned New Yorker, who owns a 1.007 OPS.

Backup 2: Bernie Williams. In addition to his .921 OPS, he homered in the clinching 2000 World Series Game 5 and caught Piazza’s blast to center for the final out.

Alex Rodriguez: Come on, we’re really not gonna take him? A .929 OPS and 13 homers get him aboard.

Matt Harvey: As he dreamed of joining the Yankees someday, the right-hander put up one heck of a job interview in the form of a 1.25 ERA over three starts.

Orlando Hernandez: Not only did he compile a 1.73 ERA in four regular-season starts, but his 1999 “throw the entire glove to Tino Martinez” play might be the series’ funniest moment.

Pedro Martinez: We shouldn’t be surprised that, even in his decline phase, the all-time great tallied a 2.93 ERA against the Yankees in four starts as a Met.

Dave Mlicki: One start — first start! — one shutout. Fans still stop him today to tell him they were there.

Dellin Betances: As a Yankee, he never allowed a run to the Mets in 10 appearances totaling 11 ¹/₃ innings.

Jeurys Familia: He’ll come off the injured list this weekend and try to build on his 0.84 Subway Series ERA in 11 games.

Dae-Sung Koo: Gets lefty hitters out, hits Hall of Fame lefty pitchers, runs the bases fearlessly. What more could you want?

Francisco Rodriguez: If K-Rod underwhelmed overall as a Met, his 1.04 ERA and four saves against the Yankees weren’t the problem.

Mike Stanton: Two wins and 4 ¹/₃ scoreless innings in the 2000 World Series plus a 1.98 ERA in 15 regular-season appearances? A slam dunk.