The Bucs’ defensive pressure is responsible for Mahomes’s slow start. 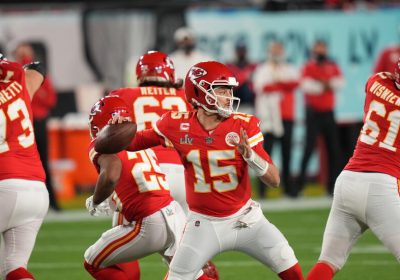 Patrick Mahomes completed only one of his first six passes, which isn’t surprising when you consider that he’s been throwing on the run from the start of the game. In fact, he’s been doing almost everything on the run.

Mahomes’s one completion was for three yards. But he has rushed three times for 24 yards. It all adds to a quarterback who is not being well protected. Buccaneers defensive coordinator Todd Bowles has thrown a variety of blitz looks at the Chiefs, including sending both cornerbacks on a third-and-8. Mahomes, as he often does, avoided the pressure but had to throw while sprinting, which led to another incompletion — a dart intended for Tyreek Hill that nailed Hill in the helmet. The pass, from the Tampa Bay 31-yard line was the Chiefs’ best shot at the end zone. The drive ended with a Kansas City Field goal.

Tyreek unable to bring in the first TD of the game as the ball goes off of his helmet. pic.twitter.com/lpNNsq05B6